Breaking News
Home / Faith / What Is Your Mission? Part 2 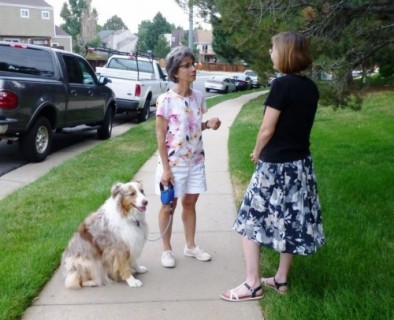 What Is Your Mission? Part 2

In part one, I mentioned that I didn’t want to leave, at the Mexico/United States border, the rich experiences I enjoyed on my mission trip .  So, upon returning home, I asked God to show me how I could apply His love here just as generously as had been done there with the Rancho De Sus Ninos mission team – without knocking on doors.  He answered by inspiring an idea in my heart.  A new, “close to home” outreach to those in my neighborhood was born.  It was simple and I don’t know why I didn’t think of it before.  Maybe I just hadn’t asked.

The very next day, as I embarked upon my three-times-daily dog walking duties,  I found myself connecting with those whom God had arranged to cross my path.  “Hi”, I opened, “today is my day to pray for other people’s prayer requests. Do you have a request you would like me to pray for?”  I told you it was simple! Only once have I been greeted with a negative response.  Most have been quick to thankfully offer their concerns and they showed no signs of offense at all. There have been only three times that I have felt lead by God  to pray with the person at that moment.  As I walked away each time, I knew that since God had given me the idea and arranged the crossing of our paths, that He would also answer the requests that were lifted up.  That brought to mind Hebrews 11:1.  As soon as I got back home, I wrote their names and requests in my notebook and continued to say a prayer for them as I added other names.  It’s thrilling to think about the possibilities of God moving on behalf of their requests. Only four times in the past four months have I crossed paths with the same people!   They were surprised and genuinely moved that I remembered them and asked about their circumstances.  I trust they realized that it was God who took notice of them and that He was mindful of their concerns. Each gave me positive reports of answered prayer…even the “non-praying” husband whose request was for his wife who was “dying of cancer”.   A few weeks after hearing a good report from him, I met him and his wife walking together on my path.  I believe that to be answered prayer!

If you want to serve God and have a significant part in His plan, just ask Him to show you what you can do in your little corner of the world.  You can make a difference with something ever so simple. He will create a mission that is perfectly tailored just for you.  Offer Him your service and see what He will do.  I promise it will be something awe-inspiring and rewarding.

I just love walking outdoors - day or night. I identify most with the creative side of God and am energized by His artistry all around this world. He amazes me every time I turn around! Yeah, God and thank you, Jesus.
Previous Part III Vacationing With Different Glasses
Next Stress and Exhaustion