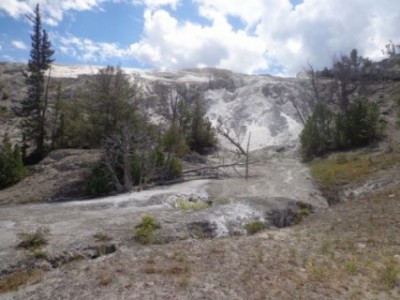 So, have I peaked your interest to continue reading and digging into the validity of the argument? If you missed the beginning of this three part series, click here to read Part I and Part II

Although there are more contestable features in Yellowstone including the Mammoth Hot Springs and Old Faithful, one of the most talked about views throughout the park are the petrified forests; areas of trees where the wood has been turned into stone, yet there is new growth of trees all around creating several new layers of trees. “In some places in Yellowstone Park, erosion of a hillside reveals layers of upright petrified trees. At Specimen Ridge, there are said to be 27 layers, while Specimen Creek contains about 50.” (Creation Ministries International)

So you may be thinking, what’s the big deal? It’s kind of interesting that wood could be turned to stone and then have new layers of trees start, but how exactly did it happen? From an evolutionist perspective, the process in Yellowstone would have taken nearly 30,000-40,000 years to form broken down as follows: “…as the result of an ongoing cycle:

1) A forest grows and then is buried by volcanic ash and other debris.

2) Dissolved minerals are soaked up by the trees, petrifying them.

3) The ash weathers into clay and soil.

4) A new forest grows on top of the previous one, which is subsequently buried by volcanic ash to begin the process again.

Almost 30,000-40,000 years? Quite the process to go through, yet since the human eye was not privy in witnessing the event, we cannot base our assumptions on the unobservable past, we can only verify observations made in the present.

Putting on our biblical glasses to explain, “the petrified forests of Yellowstone actually are the result of catastrophic burial during or soon after the Genesis Flood, which with its associated volcanic activity, would have produced the right conditions for these trees to have been rapidly deposited and then to have been petrified quickly.” (Answers in Genesis)

How do you even know that is correct? The answer is in the roots. A tree, under normal circumstances, creates a root system that is extensive and serves the purpose to spread out in order to hold the tree upright. “However, the evidence in Yellowstone shows that the roots (and branches) of many petrified trees were actually broken off before the trees were buried. Trees that grew in place and then were petrified should show an extensive petrified root system as well, but what we actually observe are small root balls—evidence of them having been forcefully pulled out of the ground at another location and transported to the Yellowstone area where they were buried.” (Answers in Genesis)

Okay, that kind of makes sense. How about the soil? Based on evolutionary evidence, the soil area of the petrified trees should have turned into clay after 200 hundred years from the volcanic ash before any new growth can take place. Yet, “The fact is that there is no clay found in these volcanic layers in Yellowstone and the average layer of organic material is only about 1 inch thick. The sediments at Yellowstone’s petrified forests also appear graded and laminated, the result of hydraulic (water) action. If these represented a forest floor covered by volcanic ash, no such features should be evident.” (Answers in Genesis)

Hmmm, interesting facts, but what about fossils. There were animals that should have been around the trees when the volcanic eruptions took place and buried these forests, right? We should be able to find animals buried in the forests that didn’t make it out in time. “However, these are completely absent from the area of Yellowstone’s petrified forests.” (Answers in Genesis)

So what’s the conclusion? An evolutionary perspective or a biblical one? A distorted view based on man’s assumptions, and man’s use of scientific methods, or biblical glasses viewing the world through the eyes of the Creator.

“Yellowstone National Park, where many natural wonders are remarkably preserved, also preserves a testament to the catastrophic Genesis Flood and its aftereffects. Evolutionary and biblical geologists agree on the observational evidence found here in Yellowstone; but they disagree on how to interpret that evidence. One rejects a global Flood while accepting millions of years.” (Answers in Genesis)

Without having a human eyewitness to the actual catastrophic events themselves, the only documented support available is what is observed through the Word of the one who was there in the beginning.

“In the beginning God created the heavens and the earth.” (Genesis 1:1)

is an author and editor for The Bottom Line Ministries as well as a member of Faith Writers. Currently she teaches high school language arts. She is a mom to four amazing blessings and enjoys every moment life has to offer. Renee has a fervor and drive to learn, she loves to read and spend time with her family, and is involved with her local church ministries. Humbled by God’s gift of words, she has a passion to write what the Holy Spirit has placed in her heart. She hopes to publish her in-progress book someday, but in the meantime, is honored to be placed as part of the TBL writing family and is holding on to the ride wherever God is leading. Renee and her family reside in their country home in Holland, Iowa.
Previous COVET vs WANT…One & the Same?
Next What Is Your Mission? Part 2