Breaking News
Home / Faith / When Should We Look Up? 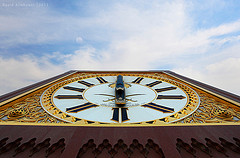 When Should We Look Up?

When the sky darkens, the thunder claps, and the lightning flashes, then we know it’s going to rain. The warning signs precede the event. It is then up to us to find shelter or be soaked by the rainfall. In the same way, God has given us signs that will precede his coming. He didn’t leave us to guess or to be taken by surprise. These signs are revealed in the Bible for us to make the necessary preparation for his return.

By now, there shouldn’t be any doubt that Christ is coming back. He died, he arose, and he ascended. But before his departure he promised to return for the righteous so that we’ll be where he is. The overused question still remains, “When will he come?” Though we haven’t the exact date of Christ’s arrival, (But about that day or hour no one knows, not even the angels in heaven, nor the Son, but only the Father. Matthew 24:36) we can watch for the signs that will usher in his appearance.

So when should we look up?

“…His disciples came to him privately and said, “…What will be the sign of your coming and of the end of the age?” Jesus answered them, “Watch out that no one misleads you. For many will come in my name, saying, ‘I am the Christ,’ and they will mislead many. You will hear of wars and rumors of wars. Make sure that you are not alarmed, for this must happen… For nation will rise up in arms against nation, and kingdom against kingdom. And there will be famines and earthquakes in various places… You will be hated by all the nations because of my name. Then many will be led into sin, and they will betray one another and hate one another. And many false prophets will appear and deceive many, and because lawlessness will increase so much, the love of many will grow cold. But the person who endures to the end will be saved. And this gospel of the kingdom will be preached throughout the whole inhabited earth… then the end will come.” (Matthew 24:3-14)

Most of these signs have and still is happening. However, the war between the US and ISIS (Islamic State in Iraq and Syria), among other wars, should be convincing enough. The fact that planes are mysteriously falling out of the sky or getting lost in mid-air is no consolation. Recent be-headings and other heartless acts proof that the love of many has grown cold. More Christians are also dying because of their belief. Obviously, the gruesome picture painted in Matthew 24 is the face of our world today.

The sign that’s most outstanding is for the gospel to reach the four corners of the earth. This is already in effect, so don’t get lazy. Pay attention to the signals, and embrace the truth of Christ’s speedy return. Will you take shelter by preparing your hearts for Christ’s return? Or will you be soaked with eternal fire?

Amelia Brown is from the beautiful island of Jamaica. She is a 28 year old Guidance Counselor by profession, but a passionate writer at heart. Most of her articles written are aimed at stimulating positive change under the guidance of the Holy Spirit. She is also a published poet and a member of Faithwriters. Outside of writing, she enjoys volunteering, cooking, and turning frowns right side up. Amelia currently lives in New York.
@ameliambrown
Previous Watcher Of Men
Next Extra-Curricular Activities: Keeping A Healthy Balance