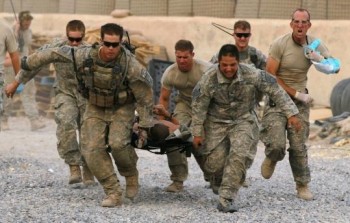 How to Respond to Veterans Suffering from PTSD

One in five veterans are diagnosed with it.

But those numbers are mere estimates because some  never come forward.

I’m talking about Post-Traumatic Stress Disorder (aka PTSD), and the devastating effect it’s having on our troops and their families—many of whom suffer in silence.

Earlier this week, a news story was released about a young couple who met, fell in love, and later married just after the groom returned from his second tour in Afghanistan. But the honeymoon phase came to a screeching halt when Brandon disappeared.

“Everything that I thought I knew got torn out from underneath me,” Brandon’s wife, Kate, said.

Brandon had taken his jeep and his dog, and vanished into thin air. The behavior was so unexpected, Kate feared for her husband’s life. So she called the police.

Days later, Brandon called. He was in the hills of Montana and ready to confess: he had lost his job due to his addiction to crystal meth. It came as a complete shock to his friends and family.

“Life and death situations were real to me every day,” Brandon told the press. “Wiping away the dirt from an IED…is it going to explode in [my] face? That changed me. I became numb. I lost all hope of the future. A lot of pain. Thinking how wonderful it would be just to end it.

“It drives you to want to take your head through the wall,” he continued. “You don’t want to relive those [memories]. It stirs up so much emotion in a short period of time and it can come on from anything…so, to me, drugs was just like, ‘Well, I’ll give it a shot.’”

Kate wasted no time coming alongside Brandon, and the two eventually founded Project Cohort—an effort to help those suffering from PTSD.

According to the U.S. Department of Veteran Affairs, Brandon is just one of thousands of service men and women who suffer in silence. Approximately 11 to 20 percent of veterans who have served in Operation Iraqi Freedom or Operation Enduring Freedom have PTSD in a given year. But in a, “large national survey nearly half of those who screened positive for probable post-traumatic stress disorder (PTSD) or major depression reported that they had not received any mental health care in the previous year.”[2]

Why? Either because of the stigma associated with utilizing mental health services, a lack of support, or because they hadn’t established relationships with others entering the group therapy process.

Then there are the veterans from other war eras: about 10 percent of Gulf War vets suffer with PTSD in a given year, and nearly 30 percent of Vietnam War veterans suffered from the condition at some point in their lifetime.2

I, personally, haven’t suffered from PTSD or walked alongside a veteran with PTSD. However, with so many heroes returning from war-torn countries, I began to wonder what I—the Christian community—could do to help.

First, we must change how we talk about PTSD and mental illness in general. For instance, have you ever heard someone quip that they are “so OCD”? Making jokes about mental illnesses of any kind immediately triggers shame in the person who may be suffering from the disorder. The same is true of PTSD—particularly for service members.  Because mental illness has been negatively associated with weakness or damage, our armed forces are far less likely to come forward and seek help. It’s one of the main reasons men and women in uniform don’t open up.

Which leads me to my second point: we must be ready to react.

While the Bible doesn’t directly address PTSD, if any biblical character can help us understand those suffering from it, it’s Job. After suffering loss after catastrophic loss, he describes his physical and mental suffering: groaning, turmoil, no appetite, sleepless nights (Job 3:24–26), nightmares (Job 7:13–14), and thoughts of death (Job 7:15). All of these are signs and symptoms of someone suffering from PTSD.

As GotQuestions.org points out, “Job made some mistakes in his time of trial, but, at the same time, he did two things that were very helpful: he maintained his faith in God (Job 13:15), and he did not hold back with his friends.”

To help victims of PTSD, we must stand ready as confidants. We must be the friend they can confide in. The U.S. Department of Veterans Affairs lists “concern over being seen as weak”, and “concerns that others would lose confidence in them”, as primary reasons why men and women in uniform don’t seek treatment. We can change that.

Now, bear in mind that Job’s friends didn’t get it right 100 percent of the time; in fact, they got it wrong far more often than they got it right. However, for three short verses, they offer us a tremendous example of friendship:

When Job’s three friends, Eliphaz the Temanite, Bildad the Shuhite and Zophar the Naamathite, heard about all the troubles that had come upon him, they set out from their homes and met together by agreement to to and sympathize with him and comfort him. When they saw him from a distance, they could hardly recognize him; they began to weep aloud, and they tore their robes and sprinkled dust on their heads. Then they sat on the ground with him for seven days and seven nights. No one said a word to him because they saw how great his suffering. (Job 2:11–13)

If you don’t know what to say, say nothing. Just be there. Let your presence speak louder than your words. You can’t empathize because you weren’t there. You didn’t see the bombs exploding. You didn’t hear enemy fire. You didn’t witness your comrades go down. But while you can’t empathize, you can sympathize and weep with them, as we have been called to mourn with those who mourn (Romans 12:15). And for those in tremendous pain, there is rarely a greater gift.

Are you a service member suffering from PTSD? Do you agree? How can your friends and family help you cope?

is a freelance writer and contract copywriter who lives in the seacoast region of New Hampshire with her husband, Eric-Thomas,of five years. She currently serves alongside her mother as the Marketing Director for God’s Girls Christian Store and More, a online retail store serving the southern New England region. Her work has been featured in several print and online publications, and she is the recipient of two Faithwriters’ Editors Choice Awards for her short stories, which are scheduled for publication in the Mixed Blessings series. Her first book, Fragile: 30 Days of Hope for the Anxious Heart, is now available at samanthaarroyo.com. She can be reached at [email protected].
Previous Is Failure Real?
Next High Fiber, Low Fiber or No Fiber?