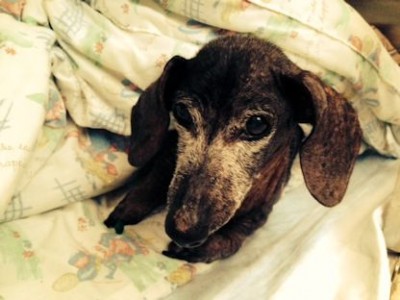 An elderly couple left their 13 1/2 year old dachshund tied up outside the Baldwin Park Animal Shelter, located near Los Angeles, CA. The canine was accompanied by an abandonment note stating that the couple did not have the funds to pay to treat their dog or have him put to sleep. When the shelter found the animal, they decided to call Leave No Paws Behind, Inc., an agency that specializes in the foster and rescue of senior dogs of all breeds. When they examined the dog, they determined he was both treatable and had plenty of vitality left in him. They also determined that the dog had been well taken care of, so they went on a mission to find the owners.

The owners were located, but they informed Leave No Paws Behind that they did not have the money necessary to care for their dog, now identified as Otto Wolfgang Maximus, and were struggling to pay for their own medical treatment. Leave No Paws Behind has agreed to pay for Otto’s food and veterinary care for the rest of his life, under the condition that their agency can make regular weekly checkups to the couples’ home.
Los Angeles Local News | FOX 11 LA KTTV

Joel M. Bauer is a 45-year-old U.S. Army Veteran from Dunn, NC, which is just outside of Raleigh. After being honorably discharged from the U.S. Army, he attended school at Taylor University, a Christian liberal arts school, in Fort Wayne, IN, where he received his BS in social work and psychology. He has worked in such places as a homeless shelter, a community based treatment center for severe mental illnesses, a school for troubled students, and other social service agencies. His current endeavor is to build The Bottom Line website into a site that inspires both Christians and non-Christians alike, and brings glory to God.
Previous A Place for Hate
Next Out from under the Card