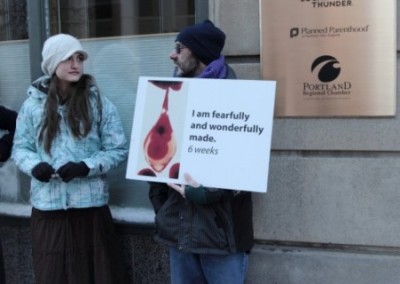 The summer of 1990, I was 16 years old and pregnant. I knew abortion was legal, but I needed to know all of my choices. I visited a crisis pregnancy center and knew I had only 3 options, abortion, adoption, and parenting. In this article, I will discuss the physical, emotional, and spiritual effects of abortions.

Teenage abortion has been linked to a number of physical and emotional problems called Post-Abortive Syndrome (PAS). Some of the psychological risks include: suicide attempts and thoughts of suicide, alcohol and drug abuse, more likely to have troubled relationships, and more psychological issues and treatment in mental health clinics and hospitals. Other emotional complications from abortions are: guilt, depression, anxiety, nightmares, self-hate, self-destructive behaviors, and a sense of isolation.

Teens have smaller cervixes, therefore during a surgical abortion, patients are twice as likely to experience cervical lacerations (cuts in cervix). Teens are also at a higher risk for Pelvic Inflammatory Disease (PID), which can be caused by an unrecognized STD. During the abortion there can be heavy bleeding, and scarring can occur in the uterus from the surgical instruments used in an abortion. In some cases, this scaring of the uterus can prevent further pregnancies.

The Centers for Disease Control, has reported that 30% of teen abortions occur after the 13th week of pregnancy. This would be considered a later-term abortion. At 13 weeks and even before, there is a lot going on in the womb. The heart begins to beat 18 days after conception. At 3 weeks, there is already a full set of DNA from the mother and the father that determines the baby’s sex, eye color, and other traits. At 6 weeks, facial features like eyes and nostrils are being formed. At 8 weeks, arms and legs are forming and little fingers are developed. At 8 weeks, even though you cannot feel the baby move, the baby is quite active now and moves around a lot. At 10 weeks, all the vital organs are functioning, including liver, heart, and lungs. At 11 weeks, the baby is almost fully formed and can even hiccup.

Teens should not only be aware of the physical and emotional effects of abortion, but the spiritual effects as well. Abortion is a source of tremendous spiritual and mental bondage. When I worked at a crisis pregnancy center, I had countless women tell me that they would hear a baby crying at night, and they would hear a voice telling them, “They murdered their baby.” It is important to know what God says about life.

“I knew you before I formed you in your mother’s womb.” Jeremiah 1:5

“For you created my inmost being, you knit me together in my mother’s womb…Your eyes saw my unformed body. All the days ordained for me were written in your book before one of them came to be.” Psalm 139:13, 16

“Your hands shaped me and made me…Did you not clothe me with skin and knit me together with bones and sinews? You gave me life.” Job 10:8-12

“This is what the Lord says-He who made you, who formed you in the womb.”Isaiah 44:2

“Do not shed innocent blood.” Jeremiah 7:6

If you are experiencing an unplanned pregnancy and need help, contact the Pregnancy Decision Online  http://www.pregnancydecisiononline.org

Stephanie has a heart and passion to see broken lives restored and redeemed through Jesus Christ. She writes through her personal experiences and her educational and professional background. She has over 17 years experience in counseling, and has a Master's degree in Social Work, Bachelor's degree in Psychology, and is a Licensed Belief Therapist. Stephanie has been married for 16 years,and has one grown son. Stephanie's desire through her writings is to bring hope and encouragement to the body of Christ, that no matter what you have been though or going through, there is restoration and redemption through Jesus Christ.
@Stephrreck
Previous I’m A Green Leafy Salad
Next Just My Take