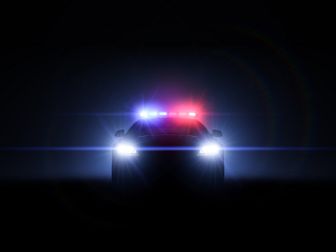 Joshua 1:9 Have not I commanded thee? Be strong and of a good courage; be not afraid, neither be thou dismayed: for the LORD thy God is with thee whithersoever thou goest.

Off-duty Police officer John A. Vescio had no idea of the drama that was about to unfold while filling his car with gas at a Mobile station in White Plains, New York last Tuesday. Another vehicle, being driven by an elderly man, crashed into the pumps the officer was filling at, causing the pump to fall over on him and burst into flames over the crashed vehicle.

Vescio was knocked down by the falling pump, sustaining minor injuries. He initially ran from the fire, before quickly returning to help the elderly driver of the crashed vehicle; pulling him from his car and dragging him to safety as the flames began to erupt in intensity.

Vescio then continued to bravely take charge of the situation. He began directing people away from the flames, as well as his own unmarked cruiser, which had a weapon and ammunition in the trunk.

Vescio told reporters, “It happened so quick. It was hard to think. I pretty much just reacted.”

The 69 year old driver of the crashed vehicle was incoherent, and thought to be in diabetic shock at the time of the accident.

Vescio, a New York State Police senior investigator, reacted quickly and bravely in a dangerous situation. Putting his own life on the line to save another. In the best tradition of heroism and selfless devotion to help those in need.

“Despite Senior Investigator Vescio’s own injuries, he remained focused and committed to saving the life of the operator of that Toyota,” said police Capt. Dominick L. Chiumento. “If not for his swift response, the situation could have turned much worse.”

Vescio and four other gas station patrons were injured in the incident. Vescio and one of the other injured patrons were taken to a local hospital for treatment, and later released.

Despite the damage and flames, the weapon and ammunition in the trunk of Vescio’s cruiser were not compromised.

Officer Vescio’s bravery and devotion to duty helped to save lives, and keep a bad situation from becoming much worse. He was surely sheltered by the hand God in his heroic efforts. This is something that we can apply to our own lives by remembering God is always with us, even in times of danger and despair.

James V. is a guest author at The Bottom Line. He also enjoys doing work with programming and video narration. He has his own YouTube channel and does online streaming for the latest video games.
Previous God, And the Rescue of Apollo 13
Next Balancing the Busyness