Breaking News
Home / Featured / God, And the Rescue of Apollo 13 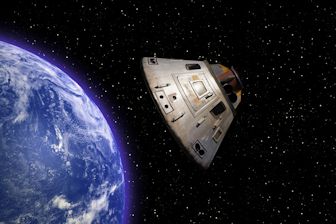 God, And the Rescue of Apollo 13

God, And The Rescue Of Apollo 13

“Houston, We Have A Problem,” are the well-known words of Apollo 13. Some of us are old enough to remember that week in April of 1970; others have seen the movie. From 200,000 miles from the earth America had a disabled spacecraft with an interior atmosphere threatening the lives of three astronauts on board.

Sitting in front of a computer screen at Mission Control in Houston, Texas, was Jerry Woodfill, who was monitoring the spacecraft’s warning system. He was one of the first to hear those five words. With all of his education and years of experience at NASA he was faced with an unprecedented situation with no immediate answers. Jerry said, “Though I was not a believer, others launched prayers heavenword so that I saw technical miracles unfold the next four days which convinced me that God was, indeed, real-that He answers prayer, and was responsible for the rescue of the Apollo 13 crew.” He explains four specific situations where he saw God at work.

Remember when the astronauts had to make a contraption to stabilize their CO2 level? Data appeared on the computer screen that normally did not show up but without which Mission Control would not have known how to deal with the problem, nor make the makeshift device. They had “to make a square peg fit into a round hole,” a technique never taught in engineering school; the unknown data provided the information necessary to do the procedure. Making the device required duct tape. Guess what, some worker had put a roll of it on board, without which the lives of the astronauts could not have been spared. To this Jerry thought, “…There is someone beyond myself assisting here…Someone was watching over us who can make a square peg fit into a round hole.”

Then, if you recall, there was a problem with the navigation and reentry. He heard the astronauts talking about devising a new plan for reentry and thought. “How can such a guidance technique be fashioned so quickly?” A coworker had devised and programmed into the Mission Control computer a procedure that had been totally forgotten about until then, that enabled the astronauts to “jury-rig” the technique. Jerry said that he knew they had to be getting supernatural help. God had it put there “to save the men of Apollo 13.” He goes on to say that they were always making the right call even with insufficient data.

Eighteen months later Jerry accepted Christ as his Lord and Savior. Since then he has written a book about his experience and has shared his faith with people at NASA. Many people at the space agency have come to a saving knowledge of salvation through Jesus Christ, including Charles Duke, the tenth man to walk on the moon.

Even though there have been some tragedies God has been at work in the U.S. Space program. I personally believe this all started on December 24, 1968. I remember sitting in my living room with my parents in San Diego. The picture appeared on the television screen of the Apollo 8 spacecraft orbiting the moon. It was a rehearsal for the moon landing that would occur seven months later, in July of 1969. I also vividly recall seeing that as well, and witnessed via television, Neil Armstrong make the first footprint on the moon’s surface.

As three astronauts, Bill Andrews, Jim Lovell, and Frank Borman, circled the moon, the whole world waited to hear a Christmas message. Their first words were not, “Merry Christmas from the moon.” They said, “In the beginning God created the heaven and the earth…” and went on to read the first ten verses of Genesis. What an inspirational moment! The atheists must have gone into a rage. God was glorified that evening from 240,000 miles in space.

I believe God made his sovereign power and grace known in rescuing the Apollo 13 crew because he was given glory on December 24,1968. Houston’s problem was God’s solution. Jerry Woodfill saw things that were technological miracles and others that were preordained by God, without which the three astronauts would have all perished. God also transforms human hearts in ways that transcend human intelligence and reasoning.

John Livingston Clark is 67 years of age and lives in central Washington State. He has written two published books, and two published poems. His initial book is called, " God's Healing Hope: Breaking the Strongholds of Wrong Thinking." His second book, released in December of 2016, is a motivational book written to seniors titled, " Seniors: Are You Retiring or Recharging?" Both books are available on amazon. You can also view his writings on www.faithwriters.com. John is available to speak on a variety of topics. Visit me at jclarkministries.com
Previous Scarlet Stains Washed White As Snow
Next Always on Duty