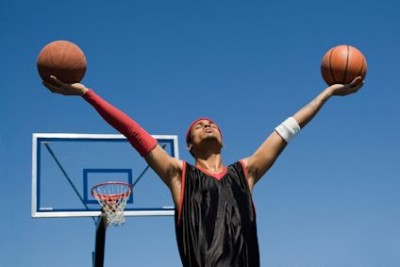 What is one way to stop bullying? You get an entire basketball team behind you. This was the case at Lincoln Middle School in Kenosha, Wisconsin. At a recent game some bullies in the stands were saying derogatory things to a cheerleader. Desiree Andrews has Downs Syndrome. Three of the players had enough and confronted them during a timeout. They told the bullies, “Don’t mess with her.” They were mad and didn’t like that. Then, the entire team showed their support.

Dee, as she is affectionately known to the players and students, is now in the company of three caring boys on the school campus. The last home game on March 9th was played in her honor, and the gymnasium is going to be named “D’s House.” She is introduced along with the players at all of the games. The entire team is being recognized with a community citizenship award.

Kenosha News says its video was watched an average of 10,000 times an hour. This is a beautiful example of people standing up to bullies and doing what is stated in Proverbs 29:2. “When the righteous increase, the people rejoice, but when a wicked man rules, people groan.” Edmund Burke, an Irish statesman of the 18th century, said, “The only thing necessary for the triumph of evil is for good men to do nothing.” The Lincoln Middle School basketball team refused to do nothing. They showed that there are things more important than winning games. Whatever the score was pales in comparison. One might say that the true points were: basketball players 10, bullies 0.

Though not all people are the same physically, we are all loved by God unconditionally regardless of how we were born. He loves us all the same, not one person more than another. If you struggle with inferiority or with people who think they are better than you, it should warm your heart to know that God created you in His image with a special uniqueness.

Can you think of someone who is being put down, for whom you can show your support? Is there some way that you can stand up for them against their “bully?” If no one comes to mind, remember the Christians around the world being persecuted for their faith. Believers in Christ should band together as a family and rally around them with prayer and unity.

John Livingston Clark is 67 years of age and lives in central Washington State. He has written two published books, and two published poems. His initial book is called, " God's Healing Hope: Breaking the Strongholds of Wrong Thinking." His second book, released in December of 2016, is a motivational book written to seniors titled, " Seniors: Are You Retiring or Recharging?" Both books are available on amazon. You can also view his writings on www.faithwriters.com. John is available to speak on a variety of topics. Visit me at jclarkministries.com
Previous New Lease on Life At A Yard Sale
Next Shopping & Bible Reading: Online or Hands-on? (Part 1)