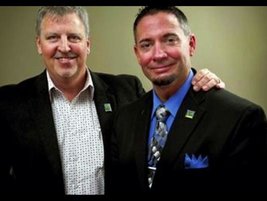 New Lease on Life At A Yard Sale

“Christ has given us this command:  Whoever loves God must also love his brother.”  1 John 4:21 (NIV)

I love yard sales!  There is no telling what treasures one may find among another person’s junk.  But one man found something quite unexpected–a new lease on life.

Don Herbert is a professional, gospel singer, and a former professional wrestler on the local circuit.  He previously had a liver transplant in 2013, but immediately afterwards began to have problems with his kidneys.  Don and his wife, Belinda, became intensely discouraged.  He was now at stage five kidney failure.

In late October, 2014, Don and Belinda were driving and she noticed a church yard and craft sale at Mercy Independent Baptist Church, in Kannapolis, N.C.  She asked Don if they could stop, and he agreed, though he wanted to wait in the car.  However, he heard gospel music playing over speakers inside the church.  He was curious, and decided to investigate.

This was where he met the pastor.  Tim Jones greeted Don, and they began a conversation.  Don told Tim about his gospel group, The Parables of Christ. Tim explained the church was having a concert and revival the next month, and he invited Don and his group to participate.  Oddly enough, Don’s medical condition was never discussed.

Soon after, Tim and his wife, Sherry, were having an informal get-together and invited Don and Belinda.  During this event, Tim learned of Don’s medical history and current condition, and realized that Don was a walking miracle because of the liver transplant.  This encounter left Tim feeling like he had always known Don.  The friendship was cemented.

Tim spent time discussing Don’s need with Sherry.  He felt God was telling him to donate a kidney to Don.  This was no easy decision.  Tim works full-time as a surgical technologist and knows the procedure and the risks associated for both the donor, and the receiver of the organ.  Yet when all was said and done, he felt it was God’s will, and he wanted to help Don.  He and Don were tested for compatibility, and were found to be a physical match.

The surgery took place on Monday, March 13, 2015, at Duke University Medical Center.  The surgery took twice as long as expected, but there was a very good reason for it.  The surgeons found a life-threatening aneurysm in the main artery leading to Tim’s kidney.  If this aneurysm had ruptured, Tim could have died.  The doctor’s were able to repair it, but this added an additional six hours to the surgery.

Today, both Don and Tim are recovering well from the surgery that saved two lives instead of one. The chances that Tim’s aneurysm may have ruptured some day were high, and the fact that it didn’t show up in pretesting is another example of the amazing twist of fate this story has taken. But is it a twist of fate, or is it the handiwork of an almighty God who turned something meant for bad to something astoundingly good?

It is obvious to those who know God well, that He used these two men to not only benefit each of them in amazing ways, but to also show how He is constantly at work in the lives of those who love Him.  In the process, a new friendship was established, a brotherhood between two men who love the Lord, and who now consider themselves brothers for life.

“Be devoted to one another in brotherly love.  Honor one another above yourselves.”  Romans 12:10

Lili lives in central North Carolina. She writes devotionals and Christian articles and has been published in e-magazines, newsletters, and articles. She is a member of Faithwriters.com. She and her husband Chuck love to travel, and are animal lovers as well. They are active in their local church. Lili credits God for any inspiration that allows her to write. It's all about Him!
@@ohiolili
Previous Three Miles Can Change a Life
Next Basketball Team Puts A Stop To Bullying