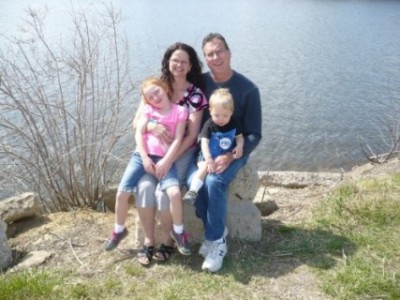 We know that blessings follow obedience but sometimes the blessings come in especially unique ways. God has a way of adding a little extra icing on the cake, so to speak.

Now in their fifties, Pastor Nathaniel Gilliam and his wife Angela found themselves in an empty nest. Angela had home-schooled their two children who now live out of state. Nathaniel’s church is a small community church that does not have the same demands as the ‘mega-churches.’ With their children now grown, Angela went back to college to get her degree but they were left wondering where God would lead them. They asked God to reveal to them what more He wanted from their lives.

Nathaniel and Angela could be described as ‘fun’ parents. A Sunday School teacher for years, Angela has a heart for children. Nathaniel could be described as a big kid at heart. He likes to play pranks on people – the kind that involve such things as rubber snakes and spiders. They are an active couple who love the outdoors and exploring nature. Taking hikes in the local parks is a favorite activity. They prayerfully considered their options and petitioned God with their request then received an answer that would change their lives forever. They felt the Lord leading them into foster care and perhaps adopting.

This is not a choice for everyone, but with their love for the Lord, life, and children it was clearly the logical choice for this couple. It’s not an easy choice – there are preparation classes, interviews, intrusions into one’s life and schedule, and the uncertainty of the legal system. It is, however, a loving decision that God can use to change lives for the better.

The first children in their care were twin baby boys, but God had different plans for the brothers. It can be bittersweet when children are returned or placed with other family members but restoring a family is the best choice when possible. Then came a brother and sister for one night after which the Gilliams waited…and waited. They began to wonder how long would they be waiting for the children God would send to them.

Four year old Chloe arrived with her baby brother. Jayden, only two weeks old, who had respiratory problems and had to be monitored. With their mother unable to care for them, they were placed with the Gilliams. After two years of attempts to reunite this family the best interests of the children prevailed. Their mother, Jayden’s father, and extended family members relinquished custody.

The custody hearing had arrived. Nathan and Angela prayed that their testimony would not be required. Jayden’s father, at first, indicated that he would not give up his parental rights. He suddenly had a change of heart. It was settled. They would be able to adopt – just like that.

They were advised to change the children’s names. Jayden became Matthew Nathan. Allowed to choose her own new name, we now know Chloe as Hannah Violet (she likes flowers). Because our Heavenly Father delights in surprising us with bonus blessings, the couple was informed that the adoption ceremony would take place on August 12th… the Gilliams’ 30th anniversary.

Psalm 40:5 English Standard Version (ESV)
5 You have multiplied, O Lord my God,
your wondrous deeds and your thoughts toward us;
none can compare with you!
I will proclaim and tell of them,
yet they are more than can be told.

Melinda is currently the worship leader at her small church in rural America. Married for 23 years, she and her husband Larry have one son. She is the Director of Mailing in the print/mailing industry by day and freelance author by night. Her desire to write is a passion borne from tragedy. God used it to take her faith to a much deeper level. Melinda is a freelance writer and member of FaithWriters. She joined the TBL team in March 2014. Believing we are citizens of a greater ‘kingdom,’ her articles for The Bottom Line examine governmental responsibility, citizen involvement and current political topics. With the great wisdom contained in scripture as her guide, she looks at today’s political environment from a Biblical perspective. She prays her words will prompt the reader to view citizenship - and every aspect of their life, through the eyes of faith. Col 3:17 To read more of Melinda’s writings on her faith, hope, and life visit her blog Still Living Still Loving or her page at Faithwriters.com. You can also follow her on Twitter @MKZbk.
@@MKBzk
Previous Valuing Our Rights
Next Religious Rights In Public Schools