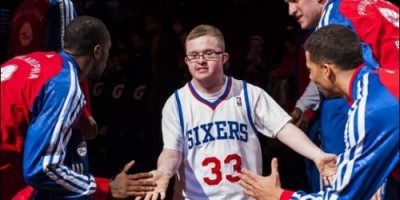 Kevin Grow experiences a genetic condition known as Down syndrome. Despite his condition, Kevin, the team manager of his high school basketball team, played during Senior Night of his final high school basketball season and scored four three-pointers in the final two minutes of the game. A video of this event was uploaded to YouTube, and has went viral with almost 1.2 million views.

Following Kevin’s success, he was given an honorary two day contract with the Philadelphia 76ers. During one of the 76ers’ games, Kevin was recognized, alongside his Bensalem High School basketball team, for his accomplishment. Kevin was also recruited by his favorite team, the Harlem Globetrotters, as their 3-point specialist and given the name KG3. Kevin Grow joins Wilt Chamberlain as the only player ever to have played for both the Harlem Globetrotters and the Philadelphia 76ers. Congratulations Kevin!
)
)
)

Joel M. Bauer is a 45-year-old U.S. Army Veteran from Dunn, NC, which is just outside of Raleigh. After being honorably discharged from the U.S. Army, he attended school at Taylor University, a Christian liberal arts school, in Fort Wayne, IN, where he received his BS in social work and psychology. He has worked in such places as a homeless shelter, a community based treatment center for severe mental illnesses, a school for troubled students, and other social service agencies. His current endeavor is to build The Bottom Line website into a site that inspires both Christians and non-Christians alike, and brings glory to God.
Previous God Never Fails
Next Husbands love your wives