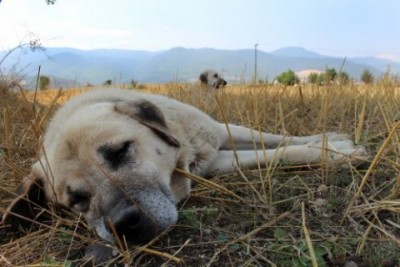 7-year old Owen Howkins has a best friend who is furry, slobbery, and full of love.

“…Hatchi got tied to a railway track and then he was hit by a train in North London…RSPCA found him. He was adopted by Ross and James. Then, he was feeling bad, and then he came to us.  He is, he does look after me.  And, he is special.”

Howkins was diagnosed with Schwartz-Jamel syndrome, which leaves his muscles in a constant state of tension meaning they are unable to relax and at times causes his body to cramp up and be in severe pain.

Owen’s mother recalled the day she first met Hatchi.  She was overwhelmed after walking into the adoption center, Dogs and Kisses business, and seeing Hatchi for the first time.  Her emotions towards the dog seemed to get the best of her especially after he wagged his tail for the first time since being rescued.  Recalling later, she stated,  “We didn’t chose Hatchi.  He chose us.”

One of the greatest benefits Owen’s parents see is how the focus of negative attention that has been on Owen his whole life has now switched to focus on Hatchi giving him a new positive perspective on life.  Even Owen recognizes the changes.

“He changed my life to not be scared of things now.”

God tells us to be strong, have courage, and to not be afraid for he is with us. (Joshua 1:9).  Hatchi’s presence in The Howken’s family is no coincidence.   God knows their difficulties and bringing Hatchi into Owen’s life is one way of showing him just how much God loves him.

is an author and editor for The Bottom Line Ministries as well as a member of Faith Writers. Currently she teaches high school language arts. She is a mom to four amazing blessings and enjoys every moment life has to offer. Renee has a fervor and drive to learn, she loves to read and spend time with her family, and is involved with her local church ministries. Humbled by God’s gift of words, she has a passion to write what the Holy Spirit has placed in her heart. She hopes to publish her in-progress book someday, but in the meantime, is honored to be placed as part of the TBL writing family and is holding on to the ride wherever God is leading. Renee and her family reside in their country home in Holland, Iowa.
Previous Our Thank You Card
Next Overcoming Heavy Temptations