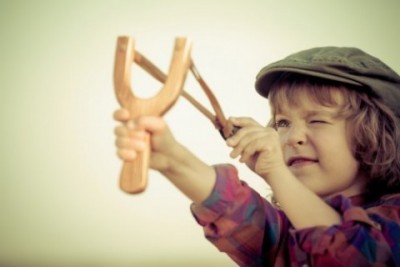 Facing the Giant Head On

“King, send me. I can fight the giant. I’m not afraid. I have to fight lions and bears with just a rock a sling, and the power of God. Why should I be afraid of a giant bully especially one named Goliath?”  After trying on the king’s armor, David realized that the only way to face the giant was by confronting him just the way he had for his flock, head on with the power of God around him. So, he headed out to the battlefield with five smooth stones in hand.

“Who is this puny boy you have sent to fight? Does he not realize that he is merely a small speck that I can destroy with one swoop of my sword? Has he no clue as to who I am? I am Goliath of Gath and I can pick on whoever I chose because no one will stop me.” As the giant continued his bragging and mocking session, David placed one smooth stone into his sling, swung it round, and before Goliath could say a word, he was down for the count for life. David had gained victory that day.

That’s exactly what Jake, a young boy who has autism, decided to do. Sick and tired of being left out and picked on, Jake took on his giant of fear and intimidation when he addressed his entire PE class to express his concerns about not being picked for games. He stated to his fellow classmates that he doesn’t believe that they see him for who he is. Instead, he believes they see him as a big target. (Huffingtonpost.com)

Jake is part of the “Bully Project”, a “social action campaign inspired by the award-winning film BULLY.” The movement has ignited the embers across the nation to help stop bullying and transform the culture of bullying into an active instead of passive environment.’

When asked as to whether he had gained victory that day, Jake states, “ Bullying has had a big impact on my life, but since the movie I’ve made a lot of friends … “ (Grenoble)

It seems that everywhere you turn, bullying is taking place; more of it is online than off. How can we use Jake’s example and take a stand for what we believe in?

“Be strong and courageous, do not be afraid for the Lord your God is with you wherever you may go.” (Joshua 1:9)

is an author and editor for The Bottom Line Ministries as well as a member of Faith Writers. Currently she teaches high school language arts. She is a mom to four amazing blessings and enjoys every moment life has to offer. Renee has a fervor and drive to learn, she loves to read and spend time with her family, and is involved with her local church ministries. Humbled by God’s gift of words, she has a passion to write what the Holy Spirit has placed in her heart. She hopes to publish her in-progress book someday, but in the meantime, is honored to be placed as part of the TBL writing family and is holding on to the ride wherever God is leading. Renee and her family reside in their country home in Holland, Iowa.
Previous God is in Control of the Politics of the Nations
Next Should I Spank My Child?