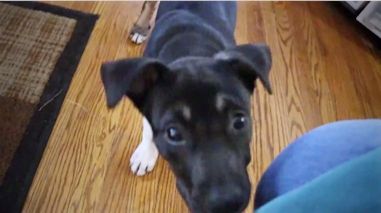 Tim and Jill McLarty adopted Hunter, a 3 month old Husky mix, from a Michigan Humane Society adoption center in Sterling Heights, Michigan. It was a month after the McLarty’s adopted Hunter that he began to fuss in the middle of the night. Jill McLarty attempted to settle Hunter by taking him outside and even cuddling with him, but nothing seemed to work. Finally she let him go free and he began running in circles, then led Jill to the kitchen and sat next to the stove.

When Jill looked at the stove she realized she had not turned off one of the gas burners all the way. There was no flame, just gas leaking out. It had been leaking for about six hours. Hunter saved the McLarty family! Hunter was a hero! Since the incident Tim McLarty has replied to the incident, “As cliché as it sounds, the life you save may save yours.” Very well spoken. Way to go Hunter!

Joel M. Bauer is a 45-year-old U.S. Army Veteran from Dunn, NC, which is just outside of Raleigh. After being honorably discharged from the U.S. Army, he attended school at Taylor University, a Christian liberal arts school, in Fort Wayne, IN, where he received his BS in social work and psychology. He has worked in such places as a homeless shelter, a community based treatment center for severe mental illnesses, a school for troubled students, and other social service agencies. His current endeavor is to build The Bottom Line website into a site that inspires both Christians and non-Christians alike, and brings glory to God.
Previous “The Encounter” Movie Review
Next Thank You For Your Grace, Lord