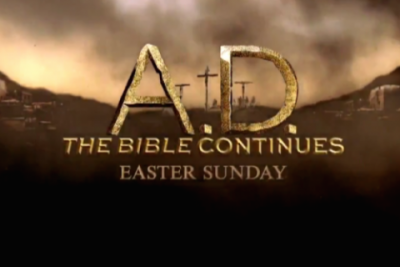 From Executive Producers Mark Burnett and Roma Downey comes the much-anticipated sequel to The Bible. The series opener premiers Easter Sunday on NBC and picks up right where The Bible left off, immersing viewers in the days following the death of Jesus.

In an interview on NBC.com, Burnett describes A.D. to be “Game of Thrones meets the Bible.”

After the blockbuster success of The Bible (with over 100 million viewers tuning in), expectations are high for April 5.

According to a “sneak peek” video on nbc.com, we’re told that over 500 builders were working on the first-century set around the clock to really immerse the actors in the biblical times. They rebuilt the temple of Jerusalem and the old city. They even took significant advice from biblical experts to ensure that the scenes depicting biblical episodes are accurate to give viewers a real sense of what it was like to be a disciple in the days following Jesus’ crucifixion.

According to the companion site for A.D., the series “starts with the Crucifixion and The Resurrection –catalysts that altered history. What follows is the epic tale of ‘A.D.’ chronicling several of the most intense and tumultuous decades in history. The complicated birth of the early Church was a time filled with enormous faith, persecution, political intrigue, brutal Roman oppression and the desperate Jewish revolt. The entire world was transformed, and the course of human history would be forever changed.”

Downey has said, “The stories are told with grit and excitement.” The stories she’s referring to are those found in the book of Acts. Chapters one through 10 will be covered in the first 12-week season (Easter Sunday through Father’s Day).

In an article published by Click to Houston, Downey was quoted as saying, “I think people are hungry for these stories, hungry for hope, and they are hungry for their connection to God… The intention was to create something beautiful that would touch people’s lives and bring them closer to God. We want people to see themselves in this story.”

People are hungry. And what better way to reach a famished crowd than through television. It’s as if the producers themselves are taking up the call in Matthew 28:19 to “go and make disciples of all nations.” They are certainly spreading the Gospel message. Only time will tell, however, how accurate the drama is in regard to biblical representation.

“For the first time, America’s gonna have a snapshot of what real, authentic, vibrant, fired-up Christianity is all about,” Pastor Ray Johnston Bayside Church said.

Take a look at the trailer below, and tell us: will you be tuning in on Easter Sunday for the premier?

is a freelance writer and contract copywriter who lives in the seacoast region of New Hampshire with her husband, Eric-Thomas,of five years. She currently serves alongside her mother as the Marketing Director for God’s Girls Christian Store and More, a online retail store serving the southern New England region. Her work has been featured in several print and online publications, and she is the recipient of two Faithwriters’ Editors Choice Awards for her short stories, which are scheduled for publication in the Mixed Blessings series. Her first book, Fragile: 30 Days of Hope for the Anxious Heart, is now available at samanthaarroyo.com. She can be reached at [email protected].
Previous A Secret Miracle
Next Making Lemonade Out Of Very Sour Lemons