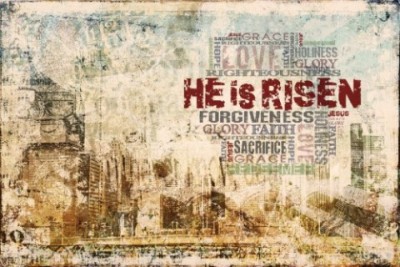 The punishment He endured was greater than any punishment that anyone had ever suffered before, or has suffered since. He was taken into custody, imprisoned, tried, and convicted – unjustly. Hanging between two genuine criminals, His punishment was quick and it was severe. His death, His separation from His Father – agony.

Luke 24 6 He isn’t here! He is risen from the dead! Remember what he told you back in Galilee, 7 that the Son of Man must be betrayed into the hands of sinful men and be crucified, and that he would rise again on the third day.”

Now – He sits at the right hand of the Father. The suffering He endured was necessary to fulfill the will of the Father. Jesus did what had to be done.

Crimes deserve punishment and we are all criminals. For our crimes (our sins), we deserve the ‘death penalty’ – an eternal death. In this world, we classify crimes based on their severity. Speeding (yes it is breaking the law), music piracy and disorderly conduct are the crimes that are viewed as not that big of a deal. Those criminals aren’t that bad. The murderers, kidnappers, and sex offenders – they are the ‘real’ criminals. Lock ’em up and throw away the key. Better yet, give them the death penalty. Given the pain that they have caused others they certainly deserve it, right? It’s difficult in our human capacity to feel compassion for criminals who harm (and take the lives of) the loved ones of others. They don’t deserve forgiveness or mercy. They certainly don’t deserve compassion. Though some feel led into prison ministry most can only feel disdain for those who are imprisoned.

Ephesians 2:4-6 (NLT) 4 But God is so rich in mercy, and he loved us so much, 5 that even though we were dead because of our sins, he gave us life when he raised Christ from the dead. (It is only by God’s grace that you have been saved!) 6 For he raised us from the dead along with Christ and seated us with him in the heavenly realms because we are united with Christ Jesus.

God is Loving, but He is also Holy and Just. His justice is perfect and in the eyes of God sins are not measured by their severity. The truth is we are all sinners deserving death. We deserve the ‘eternal death penalty’ – separation of our Holy God.  Jesus paid the debt for our sins in full. He was the necessary Holy Sacrifice. Because God loves us, His son Jesus bore every single sin, large and small, as He hung between real criminals. Then in the midst of His agony He asked the Father to forgive them… to forgive us.

In this world, convicted criminals receive the penalty for their crime. Through Jesus Christ they too, can receive an eternal pardon – just like the rest of us ‘common criminals.’

Melinda is currently the worship leader at her small church in rural America. Married for 23 years, she and her husband Larry have one son. She is the Director of Mailing in the print/mailing industry by day and freelance author by night. Her desire to write is a passion borne from tragedy. God used it to take her faith to a much deeper level. Melinda is a freelance writer and member of FaithWriters. She joined the TBL team in March 2014. Believing we are citizens of a greater ‘kingdom,’ her articles for The Bottom Line examine governmental responsibility, citizen involvement and current political topics. With the great wisdom contained in scripture as her guide, she looks at today’s political environment from a Biblical perspective. She prays her words will prompt the reader to view citizenship - and every aspect of their life, through the eyes of faith. Col 3:17 To read more of Melinda’s writings on her faith, hope, and life visit her blog Still Living Still Loving or her page at Faithwriters.com. You can also follow her on Twitter @MKZbk.
@@MKBzk
Previous Tested, Tried, and Redefined
Next Loving the Unlovables