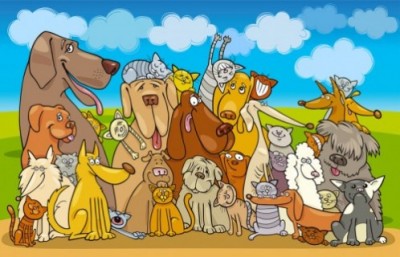 ‘When times are good, be happy; but when times are bad, consider: God has made the one as well as the other.’ Ecclesiastes 7:14 (NIV)

Hurricane Sandy ripped up the Eastern Seaboard of the United States  in October 2012. It was a vicious storm, bringing death and destruction with it.

Imagine losing all you own, without much time to prepare. Your home, your belongings, everything, gone in just a few moments of time. One family experienced this, but were fortunate to survive. They are thankful they were spared. Meet the James family, from Keansburg, New Jersey.

There was one thing they grieved for long after the storm passed…their terrier-pitbull, Reckless. Reckless had been in their fenced in yard when the storm hit, and he broke out and ran. They searched for him for nearly 18 months, but were fairly certain their pet had been killed by the storm.

Chuck and Elicia James have two young daughters. One was celebrating a tenth birthday. While not wanting to give up on Reckless, but knowing it was time to get another dog, they went to the local animal shelter.

They arrived at the Monmouth County SPCA, ready to have a ‘meet and greet’ with the dogs in residence there. Elicia walked up to the first cage, and realized the dog inside looked alot like their own Reckless. This dog’s name was Lucas. He had been found wandering the streets, and was brought to the shelter.

When the dog saw Elicia, he jumped up with joy. He couldn’t get close enough to Elicia, or the rest of the family. Upon closer inspection, Elicia found the scar she knew would be on his head. He had put on a little weight, but he was definitely their Reckless.

Chuck has said that it was fortunate that this particular shelter is a ‘no kill’ shelter. His words were, ‘Thank God for no-kill shelters because every time they kill an animal, it may be somebody’s friend who might be lost. Thank God they didn’t put him down because this would have been a different story.'(AP)

Chuck feels that this dog, Reckless, is supposed to be theirs. The way the discovery unfolded, it just has to be. The family is happy to have their dog back, and Reckless is a very content boy!

The family is living in a hotel while their home is repaired. Reckless is doing well, and has since been microchipped. Chuck and Elicia are wisely making sure that Reckless, if he wanders away again, will be more easily found. I’m betting he won’t have a chance to get lost again!

God, in His loving kindness, knows how much we love our pets. Since He is their creator, He must love them even more. He works in wonderful ways to bring blessings of hope and love in the midst of the storms of our lives.

‘We give thanks to you, O God, we give thanks, for your Name is near; men tell of your wonderful deeds.’ Psalm 75:1 (NIV)

Lili lives in central North Carolina. She writes devotionals and Christian articles and has been published in e-magazines, newsletters, and articles. She is a member of Faithwriters.com. She and her husband Chuck love to travel, and are animal lovers as well. They are active in their local church. Lili credits God for any inspiration that allows her to write. It's all about Him!
@@ohiolili
Previous Founder of the Family
Next “Johnny” Movie Review