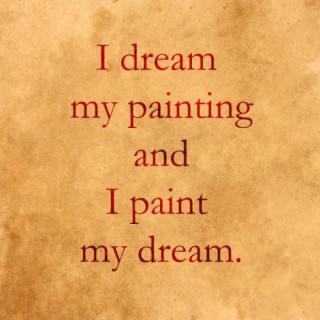 He painted in brilliant colors, full of energy and light. He captured what his human subjects seemed to be feeling, and brought life to fields of flowers and   twinkling  stars in nighttime skies.  Yet he suffered from mental illness, failed at his heart’s desire to become a preacher, and had unhealthy relationships with several women during his adult life which ended at age 37 under questionable circumstances.

Vincent VanGogh’s life was filled with melancholy, starting before he was ever born. Coming into the world on what would have been the first birthday of his older brother for whom he was named, his own name was thus engraved on a tombstone before his birth in  the year 1853. With a preacher for a father, VanGogh hoped to follow in his footsteps, even working as a missionary in a coal mining community for a time. There, he was known as “Christ of the Coal Miners.” But  Vincent would never see success during his lifetime, in his paintings, his romances,  his  desire to share the gospel, or his relationships with others. He would spend time in hospitals for both physical and mental disease, painting within their walls.  He was familiar with suffering,  even torture of the soul. Still, God gave him a gift–to see color and beauty in a world he must have viewed as dark and lonely.

Through Vincent’s eyes he gave the world reds, yellows, and blues…in snow drifts piled high, stars covering a night sky, flowers in deep colors, pastures green and fresh.  He saw what could be, bringing it to life  through his brushstrokes– the truth that there is  hope and beauty in   the midst of  darkness and suffering.

It was several years after his untimely death that VanGogh’s paintings began to be displayed around the world.  Even today  he is known  as one of the world’s most influential artists and is  considered the greatest Dutch painter after Rembrandt.He put  his own life in perspective as he struggled to sell his paintings:  “I am still far from being what I want to be, but with God’s help I shall succeed.”

To see beyond what is presented in the world around us,   to believe beyond what is in our own mind, to know that God is there in the center of it all, this is faith.     Like this famous painter,  we can choose what we want to see, allowing God to bring beauty from our lives right where we are. Maybe you’re on a journey, reaching toward a dream, or maybe your looking for a way out of a painful circumstance,  feeling far from that place where you want to be. But God will help you succeed. Put your faith in Him.

My husband Dan and I have three children and three grandchildren. We live in central Illinois. I am a graduate of The Institute of Children's Literature, a member of faithwriters.com, and a member of SCBWI. My writings have been published at chirstiandevotions.us, in DevotionMagazine, the PrairieWind Newsletter, and here at thebottomline.co.
Previous Finding the Dream Job
Next The Connection between Worship and Warfare