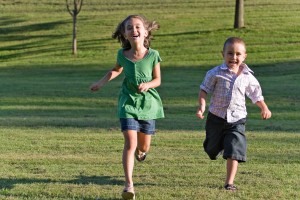 Three Miles Can Change a Life

Jake is a 10-year-old boy who lives in the orphanage with his 11-year-old brother.  They have been in and out of foster care since they were taken from a drug-addicted and negligent single mother.

Marie is a developmentally and mentally disabled 12-year-old girl, who has been with the orphanage for a couple years.  She had suffered much physical and sexual abuse by her mother’s various boyfriends.

These are the kind of stories and children who have been handed a tough lot in life, who live in a New Hampshire children’s home, run by nuns–literally. The children range in age from three to 13.

They are called “the running nuns,” and part of their spiritual and motherly wisdom is addressing the needs of the children in its care.

Every day, typically early before school, four or five of the nuns take all the children out for a jog through the streets of the community.  This is not a simple walk around the block, it is a quick-paced, three-mile jog/run.  Starting at age seven, everyone is expected–every day–to run the three-mile jog with the group.  Younger children, that are five or six, “only” have to run a shortened two-mile jog.  And be aware, there is no walking allowed or encouraged.

Ask any runner and they will tell you that they simply feel better after a run (and/or during their run).  Though I don’t enjoy running, I agree, after I am done I feel good, better than when I started.  The physiological reason for this is the release of the body’s endorphins.  And for troubled youth, it is even more significant.

These children typically have no control over their own lives.  They also struggle to accomplish concrete goals.  And, like most kids, they have a lot of energy.  Add to this all the pent-up anger and frustration they often feel, and it is no wonder this daily jog is an integral part of the therapy the nuns provide.

But you do not have to be an abandoned or troubled child to get the same benefits out of going for a run.  Adults go running, or conduct other types of exercise like boxing, in an effort to battle their own troubles and demons.  This can be as important as seeing any counselor, or praying, or taking a psychiatric prescription.  The Apostle Paul knows it to be true:

“Thus I do not run aimlessly; I do not fight as if I were shadowboxing. No, I drive my body and train it, for fear that, after having preached to others, I myself should be disqualified.”  1 Corinthians 9:26-27

For a time, I joined the nuns and children on their runs, but there was one thing that bothered me. There were numerous kids there, most of them under 11, who could run laps around me!  There was an eight-year-old boy who could beat me by over a minute!  God Bless that kid.  The daily jog was one of the few things that he excelled in, and it gave him confidence–in SOMETHING.

Sometimes that is all we need, to have that feeling that we accomplished something and that we are good at it.  For many children, that is a very rare feeling.

Have you run to overcome problems or issues within your own head? What other forms of exercise have benefited you both physically and mentally?

Ken Lambert, D.Min, lives with his wife and twin boys in southern New Hampshire, and has written for a variety of religious and secular publications. He is co-author of Top Ten Most Influential Christians- since the Apostles, and is an adjunct instructor for Agape Seminary (Church History, Wisdom Books).
Previous Teens: Set Eternity In Your Hearts
Next New Lease on Life At A Yard Sale