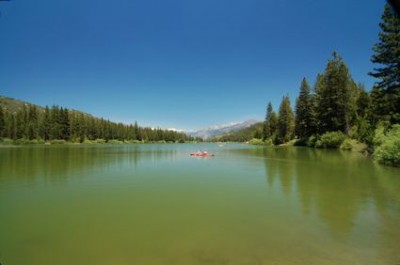 The Faith Of A Christian Camp Tested By Fire

A fire has been burning in the mountains of central California for several weeks, having destroyed nearly 50,000 acres with less than 20 percent containment as of this date.  In the center of it all lies Hume Lake Christian Camps, a conference and retreat center for all ages. It is a place where countless lives have been transformed. My sister and brother-in-law used to live there as part of the full-time staff. Recently, I received an email from them that the camp had to be evacuated. However, this was the beginning of a miracle that is unfolding day by day. The camp is living out I Peter 1:7 in a literal way, “that the proof of your faith, being more precious than gold which is perishable, even though tested by fire, may be found to result in praise and glory and honor at the revelation of Jesus Christ.”

So far, the camp has been left untouched, although the fire at times has been quite close. The camp has been able to feed the fire personnel due to its large kitchen and dining facilities that normally provide meals for thousands of campers. But what can be done when food runs low with only one access road and fire looms in the distance? This is also the story of two good Samaritans.

A local distributor for Sysco Corporation in the Fresno, California area, sent a driver who was courageous enough to bring a truck loaded with food. Hume Lake posted this comment on Facebook: “Despite the fire’s proximity and the road being closed, Sysco was still willing to bring the food we needed to feed the fire fighters.” This heartwarming deed is truly inspiring!

Many of the Hume Lake staff members have had to double up in sharing space in the Fresno office. This is where another concerned and caring business enters the picture. In appreciation of the camp staff a meal was provided by Chick-fil-A, in Fresno.

These two businesses are examples of love and concern. They were not content to just watch what happens, but provided support and encouragement. Proverbs 17:17 says “A friend loves at all times, and a brother is born for adversity.” They had a “fire in their heart” for those affected by this raging inferno. Many hearts were warmed by their selfless actions.

What are some opportunities that you might have to demonstrate love to others facing trying and difficult circumstances?

John Livingston Clark is 67 years of age and lives in central Washington State. He has written two published books, and two published poems. His initial book is called, " God's Healing Hope: Breaking the Strongholds of Wrong Thinking." His second book, released in December of 2016, is a motivational book written to seniors titled, " Seniors: Are You Retiring or Recharging?" Both books are available on amazon. You can also view his writings on www.faithwriters.com. John is available to speak on a variety of topics. Visit me at jclarkministries.com
Previous Is All Sin Really Equal? (Part 2)
Next Discover Hope in the New Song “My Story” by Big Daddy Weave