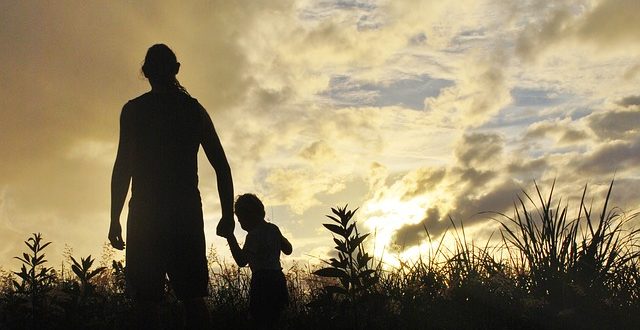 My Dad’s Big And Strong Hands

“Fear not, for I am with you: be not dismayed, for I am your God; I will strengthen you, I will help you, I will uphold you with my righteous right hand.” (Isaiah 41:10)

As a very young boy, my world to me was but a toy.
Every single day was a new adventure to be enjoyed.
I was testing the limits and jumping over fences.

There were heights to be climbed and going out past the edges.
Never much thought was given to the chances I was taken.
Or to when all fell to pieces because someone said “chicken.”
The time would always come when one more step was too far.
Who knew that baseball could make it to the neighbor’s new car.
When things didn’t always go just how they were planned.
I learned to run to my Dad’s big and strong hands.

What his hands couldn’t do from a garage workbench.
I’m amazed what he could do with a little love and a wrench.
When that bike didn’t quite make it over that last big thrill hill.
Or when that radio flyer didn’t fly quite as far as I might of willed.
When my best Evel Knievel found my cycle wasn’t able,
And my first must-have car always got stuck into neutral,

When my first steady girl,
Dumped me for a guy that looked like a squirrel.
Or that first perfect job, Was more like working for the mob.
I ran to my Dad’s big and strong hands.

When I overextended my means,
And I had no more money in my jeans.
Or when I wanted to go to college,
But there was no way I could ever manage.
He came running to me with his big and strong hands.

Much bigger now were my little hands,
But so too were my world’s constant demands.
The day came when I realized things were changing.
I learned my Dad’s hands could not fix everything.
So much in my life was way beyond his repair.

My world’s demands were becoming more than I could bear.
When I was young, a broken toy seemed like a very small thing.
But, my Dad could see it meant the whole world to me.
A broken heart can leave you hopeless in defeat.
Broken dreams can leave one to where death will leave a sting.

I am so thankful my Dad taught me what love really means.
That I’m just a little boy who is still skinning his knees.
When the world gets scary and even long before that, I am ready.
To go to the only One whose hands are truly Rock steady.
I reach out to hands that are much bigger and stronger.
The hands that stretched out open and empty for this lowly sinner.
My Dad taught me to go running to Him every day,
To my Heavenly Father’s bigger and stronger hands.
He taught me that if I didn’t, my world would crumble like castles I had built in the sand.

I remember asking my Dad one day if that was really true,
Did he think his Heavenly Father would be my Father too?
He took both my hands and he held them out open and empty.
In his big and strong hands, he held mine as he prayed with me gently.
He said Father you’ve blessed me with big and strong hands,
But there will come a day when they won’t be enough to help my son stand.
Father, He Said, I pray to you and before this my own son,
Will you show Him how much bigger and stronger Yours are through Your Son.

Like that very young child, I still know where to run.
Because my Dad could admit he was weak in front of his own son.
I didn’t understand it fully then, but as a grown man now I can see.
His hands became so strong, because he knew they were so weak.
On the rock of Christ Jesus I now daily stand.
I’ve not built my crumbling castles on the world’s shifting sand.
Thank you Dad for teaching me what love really means,
And that I’m never too old to admit I am weak.
Daily I go running to Christ’s bigger and stronger nail scarred hands.

I am a layperson with 35 yrs. of teaching Sunday School, bible studies, and preaching on occasion. I teach a bible study in a local prison. I am a 36 yr. counselor/social worker. I am disabled and have devoted the past four years to studying, praying, and writing about my greatest love; this gospel of Jesus Christ that has the power to save a man's soul. I also write devotions for a Church in Marion, VA and I write for an orphanage/ministry in Zambia, Africa.
Previous Difficult Times As These
Next In The Beginning Was The Word