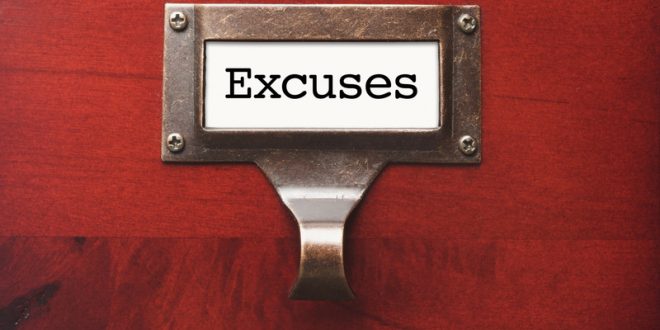 Leave the Excuses Behind

Discipline has changed since my elementary school days over 40 years ago. Outside our principal’s office was a line across the floor where the feet of those sent for a visit with him would line up perfectly…waiting.

While almost unheard of today, corporal punishment was administered to some offenders by way of a long wooden paddle, while others were obligated to a Saturday workday for their offense, which included bathroom cleaning.  Others were expelled, finding themselves in sweltering classrooms all summer long, making up their schoolwork while their friends went swimming, rode bikes, and just hung out in the neighborhoods.

One thing we did not have were acceptable excuses for our unruly behavior. When you were caught red-handed, you were in trouble! And telling your parents was to be avoided if possible, as that only led to more trouble at home. Mothers did not blame teachers or principals for their enforcement of rules.

When I look back on those days I am thankful. Why? Because we learned that our behaviors had consequences and that excuses did allow us to squirm out of the consequences of our choices.

While God is a loving Father Who showers us with grace and renewed chances with each new day, the time is coming when we  will give account of how we lived, and on that day, there will be no excuses.

For ever since the creation of the world His invisible attributes, His eternal power and divine nature, have been clearly seen, being understood through His workmanship [all His creation, the wonderful things that He has made], so that they [who fail to believe and trust in Him] are without excuse and without defense. Romans 1:20

Making excuses in childhood is a natural part of growing up. But taken to extreme, excuses can bring destruction. It is a sobering truth that no one will have an excuse for their unbelief in God,  so evident in His wonderful creation all around us. If we are wise, we will leave the excuses behind!

My husband Dan and I have three children and three grandchildren. We live in central Illinois. I am a graduate of The Institute of Children's Literature, a member of faithwriters.com, and a member of SCBWI. My writings have been published at chirstiandevotions.us, in DevotionMagazine, the PrairieWind Newsletter, and here at thebottomline.co.
Previous A Lesson from Lister’s Life
Next Has Anybody Seen My Friend