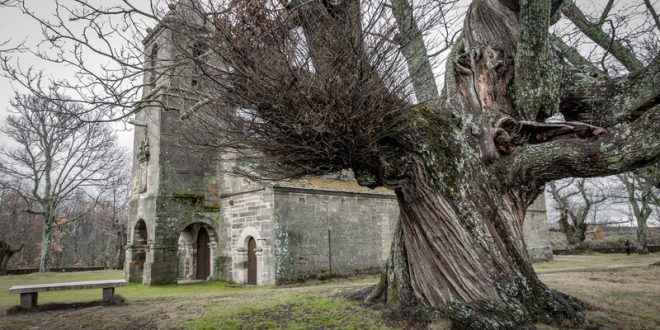 He was a young sailor when he sailed with the Spanish Armada in the year 1588. Sadly, what was at first an adventure would soon be his demise. Sailing aboard one of the fleet’s finely built ships near the coast at Antrim, Ireland, a fierce wind destroyed the vessel and he was drowned. When his body washed ashore at Antrim County, compassionate residents buried the young foreigner in the churchyard cemetery at St. Patrick’s Church of Ireland.

That should have been the ending of his tragic story, but soon enough, a young sapling began to sprout up from his grave site—a new Chestnut tree. At the time of his death, the sailor had carried several variety of seeds in his coat pocket. The Chestnut germinated after his burial and five centuries later, that tree lives on. Its branches still spreading out as a shelter over the young sailor’s grave.

Unless a seed falls to the ground, breaking open in death and giving all that is inside it, new life cannot spring forth. Jesus described His life on earth this way in John 12:24:

I assure you and most solemnly say to you, unless a grain of wheat falls into the earth and dies, it remains alone [just one grain, never more]. But if it dies, it produces much grain and yields a harvest.

The life of a Christian must mirror that of Christ’s. It is a seed, planted in gratitude and love for the Savior, that dies to its own desires, its own way of living. Giving our lives to serve others comes in many forms, just as different seeds produce different life. It seldom means physical death, but  it does mean sacrifice for God’s purposes.

What can be said of this great call on the life of a servant of Christ? One can say that with it comes true joy.  A life lived with eternity always in view because this world is not our true home. And a realization that the spreading of the gospel will not come about “unless I die…”

My husband Dan and I have three children and three grandchildren. We live in central Illinois. I am a graduate of The Institute of Children's Literature, a member of faithwriters.com, and a member of SCBWI. My writings have been published at chirstiandevotions.us, in DevotionMagazine, the PrairieWind Newsletter, and here at thebottomline.co.
Previous THE STORMS OF LIFE
Next Distracted Christians–A Weapon for the Enemy