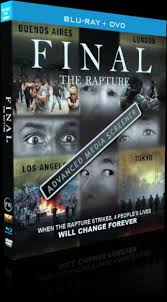 This movie is rated PG-13. It went into the theaters in September 2013. This film was shot in 6 different countries.

Matthew 24:42(NKJV)—“Watch therefore, for you do not know what hour your Lord is coming.”

This movie revolves around four different people after the rapture happens. One man lives in Los Angeles. He wants to leave the country because a military group wants to recruit him. He left his wife before the rapture because she was a believer and he didn’t want to listen. She was raptured. Another man is from Tokyo. He is a prized journalist and he tries to unravel the disappearance of millions of people as the government closes in on him. He is dying of cancer and is in a lot of pain, but he wants to prove that it was the rapture that happened before he dies. A young woman is in Buenos Aires. She was in a train accident and lost her memory. The fourth story involves a man who is stranded on a deserted island in the South Pacific after his plane went down. He is an atheist and was a Philosophy Professor at a college in California. He rummages through scattered suitcases and keeps running into Holy Bibles. It is an interesting movie to say the very least.

The message of becoming a real Christian before the rapture takes place is imminent throughout the movie. It makes you ponder “Am I a real Christian?” There are people in this movie who thought they were Christians and they believed in Jesus, but were left behind. There were pastors and religious leaders left behind, too.  It is a scary movie for unbelievers. I don’t know if this will bring them to their knees, but it is worth a try. It makes you think twice if it is enough to just believe in Christ, but not have any spiritual fruit to show for it. It will make some people re-examine their faith.

On the special features it shows live reactions from people who had watched the movie. Also, the Director’s Commentary is interesting. It is worth watching at least once. This is more lifelike than some of the other rapture movies I have seen.

1Thessalonians 4:16-17(NKJV)—16) For the Lord Himself will descend from heaven with a shout, with the voice of an archangel and with the trumpet of God. And the dead in Christ will rise first. 17) Then when we who are alive and remain shall be caught up together with them in the clouds to meet the Lord in the air. And thus we shall always be with the Lord.

I have always enjoyed writing little things, poems, devotionals, little short stories and bible studies. I love God and want to glorify His name and I love praising Him. I live in upstate New York with my Chihuahua-Snowball. My children are grown and left me with an empty nest. I have lots of time on my hands and love to fill it with God's Word.
Previous Piercing the Darkness
Next Precious Gowns