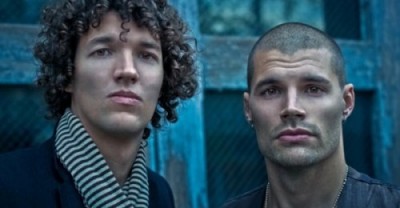 “For King and Country”: Two Brothers Sold out for Jesus

Joel and Luke Smallbone, are the members of the band “For King and Country”. The two brothers are siblings of their famous sister Rebecca St. James; talent runs far and wide in this musical family. Earlier in their careers they did numerous background vocals for Rebecca St. James. These two brothers are native to Sydney, Australia but moved to Nashville, Tennessee in 1991 to begin their musical endeavors. Their original bad name was “Joel and Luke” and was later changed to “Austoville” (You will note that this latter name chronicles their journey from Australia to Nashville.) Warner Music Group signed them to a contract in 2009 and they were on their way.

For God’s gifts and his call are irrevocable.” Romans 11:29

They felt they needed to change the band’s name Luke reports the story:

“We wanted a band name that carried more meaning. We were in the studio recording our debut record that Joel had the idea of All The King’s Men, like the Humpty Dumpty nursery rhyme. Our producer overheard our conversation and swung around in his chair and said, ‘What about For King & Country?’ And we all felt a sense of providence in that moment. “For King and Country” was the battle cry of English soldiers willing to lay down their lives for their king and their country. And now it has become our mission, to lay down our lives for our King and our country.”

Joel and Luke had significant success early in their careers. They released their single: ” “Busted Heart” (Hold Unto Me) in 2011 the song peaking at number 3 on the Christian Billboard chart. They followed up with their debut album “Crave” on 28 February 2012. The album did quite well debuting No.2 on the iTunes “Christian and Gospel” albums; chart rising to No.42 on the overall chart. The album peaked at No. 4 on the Billboard “Christian” album chart and remained on the chart for about 26 weeks. The album received rave reviews from critics.

The message behind “Busted Heart (Hold On to Me) is the cry of humanity for something greater than itself. The band’s philosophy is providential in nature:

“The power of music can impact our mood, emotions, our day. But when you merge the strength of music with the heart, hope and passion of the Gospel… it has the ultimate power not only to change someone’s day, but to impact them for eternity. This is why we write music and sing songs – we hope that people will be moved, encouraged and stirred to live a life for Someone greater than themselves.”

Joel recalls attending rock concerts sitting on his father’s shoulders. He used to plug his ears throughout the entire concert. He felt like music caught a hold of him and he followed its pull. Joel and Luke are both married; Joel has one child.

The band has done pretty well in the awards department winning a “New Artist of the Year” Dove in 2013 and 2 Grammys for “Best Contemporary Christian Music Album (Run Wild. Live Free. Love Strong.)”, “Best Contemporary Christian Music Performance/Song (“Messengers” Lecrae featuring for KING& COUNTRY)” in 2015. The Lord surely has his hand on this band and certainly on this musical family.

Who is your favorite Christian music artist?

Greg is a born again believer who testifies to the absolute transforming power of God's word. Greg has been called to full time ministry and He has known Jesus for most of his life. Greg received his degree in Pastoral Ministries from what was formerly Bethany University in Santa Cruz,California. View Greg blogs on iwriteforjesus.com. Greg has a book published on " To Jesus Christ the High Priest of my confession: A personal Testimony." find it on http://www.amazon.com/Christ-Priest-Confession-Personal-Testimony/dp/1507706847/ His testimony in short form is published in "Trials and Triumphs II" on http://www.amazon.com/Trials-Triumphs-II-FaithWriters/dp/1498416012/. This book is filled with 50 inspirational testimonies and is a project of Faith Writers.
Previous 10 Tips on Prepping Your Pets For The Fireworks
Next Taking Jesus with You