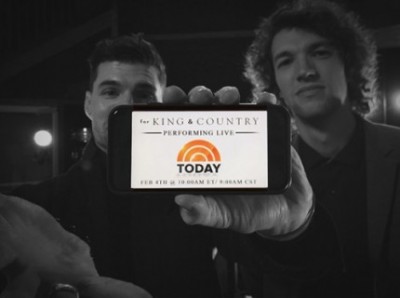 For KING & COUNTRY to Perform on The Today Show Photo Credit: For KING & Country Facebook Page

For KING & COUNTRY, Lecrae and Other Artists Hit Network Television

For KING & COUNTRY, the Christian rock/pop duo, has seen tremendous success in the last year, having recently been nominated for two Grammy awards. But it appears their singing career is on the cusp of exploding—especially with the exposure they’ll see on the Today Show on February 4 at 9:00 a.m. CT, just days before the 57th annual awards show.

“Thank you for helping us continue to put great themes of hope on the airwaves, and now even on TV screens!” bandleaders Joel and Luke Smallbone said in a statement.

The band will be performing live on the morning show, and it’s been speculated by media outlets that the band will perform “Fix My Eyes” although the band has yet to confirm details.

Over the next three months, for KING & COUNTRY will be appearing in 47 cities and before more than 600,000 fans as part of the Winter Jam Spectacular Tour.

For KING & COUNTRY isn’t alone in their television success. Fellow singer-songwriter and Christian hip-hop artist Lecrae was featured on the Tonight Show starring Jimmy Fallon back in September. The hip-hop artist performed live with Fallon’s house band during commercial breaks.

After several requests, Fallon brought Lecrae back to the late-night show earlier this month, this time giving the artist the spotlight. Lecrae performed “Made In America,” which was interspersed with quotes from Martin Luther King Jr. Lecrae ended the performance by saying “Go see Selma.”(See our review of the movie here.)

Ellie Holcomb also appeared on television late last year. The 2014 Dove Artist of the Year award winner performed on the Fox News Christmas Specal, Todd’s All-American Christmas. Her debut album As Sure as the Sun released February 2014 to tremendous acclaim.

Who have you seen share the spotlight with mainstream television shows recently? Let us know in the comments.

is a freelance writer and contract copywriter who lives in the seacoast region of New Hampshire with her husband, Eric-Thomas,of five years. She currently serves alongside her mother as the Marketing Director for God’s Girls Christian Store and More, a online retail store serving the southern New England region. Her work has been featured in several print and online publications, and she is the recipient of two Faithwriters’ Editors Choice Awards for her short stories, which are scheduled for publication in the Mixed Blessings series. Her first book, Fragile: 30 Days of Hope for the Anxious Heart, is now available at samanthaarroyo.com. She can be reached at [email protected].
Previous How Christians Can Love Their Enemies
Next The Role of Angels in Spiritual Warfare