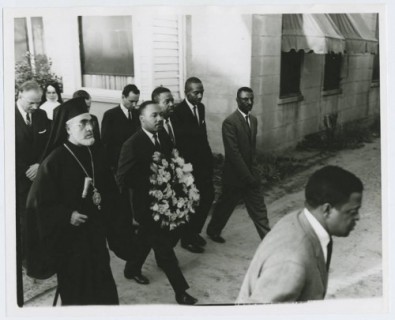 Forbes called it “one the most important films of the year.”

Despite having made several strides toward desegregation, the film opens with President Lyndon B. Johnson (Tom Wilkinson) refusing to provide Dr. Martin Luther King Jr. (David Oyelowo) with any form of federal intervention to help him secure his Constitutional right, forcing Dr. King to take his campaign to the heart of Selma, Alabama. There, Dr. King and his supporters begin a dramatic and stoic series of protests against recurring oppression, despite the threat of attack.

In a press conference this past December, director Ava DuVernay said that her intention was to “show [Dr. King] in all his human complexity and kind of unlock him from the statue,” referring to how America often sees Dr. King depicted. And viewers will agree that there was no one more suited to unravel the life of Dr. King and portray his more robust and complex character than David Oyelowo. A British actor and of Nigerian decent, Oyelowo is also a devout Christian—as was the man he played.

“Very soon after my wife and I moved to this country,” he said at the AFI Fest, “I was told from above that I would play this role on the 24th of July 2007. And I couldn’t believe it, so I wrote it down—that’s how I know the date… Never before have I engaged in an artistic endeavor that brings everything I am as a man together. Because of my faith, sacrificial love—love in the face of injustice—these are the things I hold dear.”

In an interview with the Register’s film critic Steven D. Greydanus, Oyelowo expressed how he desired to see Selma depict the role of religion in the civil-rights movement:

“It was absolutely crucial to me, because it is the truth,” he said. “These people—not just Dr. King, but his band of brothers and sisters—a lot of them were ministers. A lot of them were pastors, preachers, reverends, bishops in their own churches. They were the leaders within the black community. They didn’t just preach from the pulpit—they lived it out in their lives. That’s why nonviolence was what Dr. King was a proponent of. That’s why they chose to use love as a weapon against hate—because that’s what the Bible advocates. That’s what they believed in as people of faith. And that’s what proved, ultimately, to be successful.”

When commenting about Bloody Sunday and the scene filmed on Edmund Pettus Bridge in Selma, Oyelowo said, “If they had fought back, if they had brought guns or attacked the police, I almost guarantee you that the Voting Rights Act would not have been passed in August of that year… Like Dr. King said, darkness cannot overcome darkness; only light can do that. Hate cannot overcome hate; only love can do that. That was a theme that had to be in the film and, thankfully, is.”

The film takes a sobering look at American history, particularly that scene on Edmund Pettus Bridge, and is remarkably relevant given the alleged racially motivated violence in Ferguson and consequential protests. As one can imagine, the movie has sparked conversation over the parallels between 1965 and today.

Although it the movie has stirred a few debates over historical accuracy, including how the film portrayed the tension between the former president and Dr. King, the movie is a striking, inspirational, and absolutely riveting account of what it took to secure the right to vote.

Its’ refreshing, too. Many, in an effort to magnify the efforts to secure the landmark passage of the Civil Rights Act of 1964, overlook Dr. King’s deep faith. This film does not.

Do you think that Dr. King’s faith was accurately depicted?

Writer’s Note: While I highly recommend seeing the film, the official site for the movie advertises that seventh-, eighth-, and ninth-grade students can see Selma for free in select cities with appropriate identification. While I believe it is critical that students are educated about this defining movement in American history, parents should be advised that the film is rated PG-13 for disturbing thematic material, including violence, a suggestive moment, and brief strong language, and is not recommended for young audiences.

is a freelance writer and contract copywriter who lives in the seacoast region of New Hampshire with her husband, Eric-Thomas,of five years. She currently serves alongside her mother as the Marketing Director for God’s Girls Christian Store and More, a online retail store serving the southern New England region. Her work has been featured in several print and online publications, and she is the recipient of two Faithwriters’ Editors Choice Awards for her short stories, which are scheduled for publication in the Mixed Blessings series. Her first book, Fragile: 30 Days of Hope for the Anxious Heart, is now available at samanthaarroyo.com. She can be reached at [email protected].
Previous Ignatius: “Allow me to be eaten by the beasts…”
Next The 5 Stages of Grief