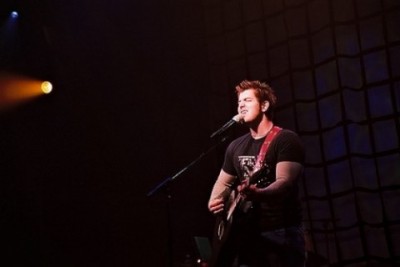 Jeremy Camp, Grammy-nominated singer-songwriter who has sold over four million albums and scored 32 No. 1 hits to date, releases his eighth studio album I Will Follow.

The album, released by Capitol CMG, combines the talents of producer Seth Mosley and guest writers like Jason Ingram. “To write with these amazing writers who helped shape the different elements of these songs was just an amazing experience,” Camp’s website reads. “I’ve never done that before. There were no parameters when we were producing and when we were writing. Vocally too, I feel like I’ve never pushed myself this much. I just went for it and said, ‘All right Lord, I am 100 percent in.’ I think I am more excited than ever about what I’m doing.”

The much-anticipated album has been on the hearts and minds of fans since late September, when Camp released the radio single, “He Knows,” the first of 11 tracks off his new record. The song echoes the message in his book I Still Believe in which he recounts the loss of his first wife to ovarian cancer at just 21 years old—just five months after they wed.

His songs have always been reflective of what God has been doing in his life and this album is no different.  Yet despite how successful his latest hit “He Knows,” jesusfreakhideout.com reviewed the album saying the “lackluster lyrics and unoriginal musical formula drag this album down.” However, the writer, Christopher Smith, quickly qualifies his statement by saying, “That’s not to say this is a bad album—in its weakest moments I Will Follow is average and in its best moments it is enjoyable. If anything, this album gives a glimmer of hope that Camp still has another album of the same quality as his earlier works up his sleeves, but as we wait for that day to come, I Will Follow should only be picked up by those who really love Camp.” In all, he gave the album three out of five stars.

Breathcast had a different opinion, calling many of the songs on the album war cries.

I happen to agree. After listening to Camp’s exclusive performance on Air 1 Radio the Monday just prior to the album’s release, I believe he’s stuck to his real, raw, honest self that has made him a Christian household name for over a decade. His lyrics are sharp, and his deep rock-n-roll vocals make you want to stand to your feet in unencumbered worship.

“In the Old Testament when God was talking to the Israelites, they’re just rebellious people, and it says, but Caleb has a different spirit,” Camp said in a statement. “He followed me wholeheartedly. And that’s what I want to do.”

For more information about Jeremy Camp and I Will Follow, pick up this month’s CCM magazine, on which Camp graces the cover. I Will Follow is now available in bookstores nationwide, and is also available for download on iTunes.

What do you think? Does Jeremy Camp’s latest album miss the mark? Or is it one of his best yet? Sound off in the comments.

is a freelance writer and contract copywriter who lives in the seacoast region of New Hampshire with her husband, Eric-Thomas,of five years. She currently serves alongside her mother as the Marketing Director for God’s Girls Christian Store and More, a online retail store serving the southern New England region. Her work has been featured in several print and online publications, and she is the recipient of two Faithwriters’ Editors Choice Awards for her short stories, which are scheduled for publication in the Mixed Blessings series. Her first book, Fragile: 30 Days of Hope for the Anxious Heart, is now available at samanthaarroyo.com. She can be reached at [email protected].
Previous Dusan Krtolica – Young Prodigy Shares His Talent Worldwide
Next 5 Keys to Overcoming Any Bondage