Breaking News
Home / Entertainment / Lessons from the Island of Berk 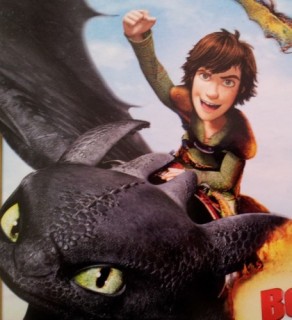 Lessons from the Island of Berk

Every movie has an agenda with lessons to teach and lessons you can learn regardless of what it intended to teach.

For better or worse, here are 8 lessons I found within the movie, “How to Train Your Dragon 2”.

1. “Independence” (depending only on yourself without listening to anyone else) is the most admirable quality

Rather than listening to his father’s experiential knowledge, Hiccup acts upon his own idea of what is best.  Although this ultimately sets off a whole slew of unfortunate events, Hiccup’s “independence”, is portrayed as an admirable quality.  His friends follow his example and proudly joke about how they don’t listen to anybody.  The baby dragons help to save the day based on the fact that “they don’t listen to anyone” either.

Rather than communicate and work together, each character sets off on their own “independent” path, ultimately complicating the plans of others and bringing about more death and destruction.

2. Nature/dragons are innocent.  It is evil people who corrupt them.

Mother Earth (Gaia) Worship is prominent in many films.  Nature is seen as the essence of all that is good and pure.  Nature is god and must be served and protected.  Mankind corrupts Nature and is therefore to be guarded against.  In this ideology, the definition of a good man is one who “understands” and seeks to protect Nature while an evil man is one who is out to hurt/injure any of Nature’s creatures (other than the human variety).

3. Sometimes you have to choose between pursuing your own dreams or giving up your life to serve others.

Hiccup faces the choice of either living out his own desire to explore the world, or serving as the leader and protector of his people.

We all face a similar choice: pursue our own wants, or follow the example of Jesus in giving up our own will to serve God and others.

Drago Bludvist reveals that he suffered the loss of his entire village and his left arm because of dragons.  Those are heartbreaking losses, but several other characters also suffered losses due to dragons.  The difference: Drago allowed his circumstances to embitter him while the other characters chose to forgive and move on.

We have all faced events in our life over which we had no control.  What we do control is our response to those situations.

5. Inner strength is of greater value than outer strength.

Although Hiccup and Toothless are small of statue, they prove victorious through the strength of their heart.

In the story of David and Goliath (I Samuel 17), David’s great faith in God triumphs over the great physical strength of Goliath.  I Samuel 16:7 says, “man looks at the outward appearance, but the LORD looks at the heart.”

Lessons About Human Nature (a.k.a. things that just “are”)

6. Everyone has a leader and a hero.

The dragons are mystically wired to surrender their will to one Alpha dragon.  Berk’s citizens, fighting in despair and panic, gain heart when their village hero arrives.

Everyone serves someone or something.  We all have a hero.  Who do we serve?  Are they worthy of our allegiance?  Is our hero worthy of honor?

7. People determined to fight can’t be reasoned to peace with words.  The only reason that will convince them is being outmatched.

Stoic warns Hiccup that Drago can’t be reasoned into peace, and his words prove true.  Drago only backs down when he has no other recourse remaining.

8. Controlling/ruling by fear is less effective than leading and guiding by love.

Drago gains control over his dragons and men by instilling in them a fear of pain and death.  Hiccup guides and influences his dragons and friends through an empowering love and respect.

In a similar way, when people respond to the law, such as those given in the Old Testament, they obey to the absolute minimum.  However, when they respond to the principles (rhema) and spiritual empowerment (grace) given and instituted under the New Covenant, they respond beyond the basics.

We are able to learn from anything.  Let us take heed to recognize the lessons being taught, using discernment to reject false teachings and to hold fast to what is true.

I was born and raised in the plains of Kansas. After high school, I moved to Omaha, Nebraska where I graduated from Grace University with a Bachelors in Bible and Elementary Education and an endorsement in ESL. A couple of months later, I moved to China and taught ESL at an International school for three years. It was during this time that I became a member of Faithwriters. In 2010, I moved back to the U.S. and taught for one year on the Navajo Reservation. At the end of that year, I moved to Albuquerque where I met and married my husband. I now have beautiful baby girl and work part-time as a writer and a tutor.
Previous Because He Loves You
Next Ten Things To Know BEFORE You Get Married