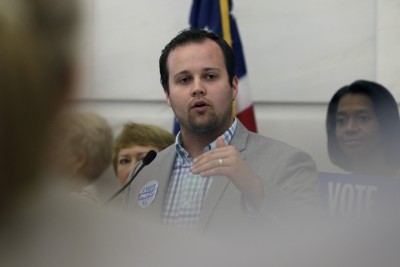 The Josh Duggar Controversy: Are His Actions Forgivable?

The Duggar family is making headlines again. The 19 Kids and Counting stars are under tremendous scrutiny after news broke of Josh Duggar’s alleged child molestation accusations.

Twelve years ago, Josh confessed that he molested several underage girls, which some reports say included his sisters. The now 27-year-old married father of three immediately released a statement that read in part, “Twelve years ago, as a young teenager I acted inexcusably for which I am extremely sorry and deeply regret. I hurt others, including my family and close friends. I confessed this to my parents who took several steps to help me address the situation.”

Josh confessed his wrongdoings to the authorities and his parents immediately took action, placing him in counseling and going through the proper legal channels. According to a 2006 police report published by In Touch, the Duggars reported the incidents, but charges against the teen were never filed. The report cites “forcible fondling.”

“. . . my parents arranged for me and those affected by my actions to receive counseling,” Josh’s statement continued. “I understood that if I continued down this wrong road that I would end up ruining my life. I sought forgiveness from those I had wronged and asked Christ to forgive me and come into my life. I would do anything to go back to those teen years and take different actions. In my life today, I am so very thankful for God’s grace, mercy and redemption.”

In the wake of the controversy, Josh quickly resigned from his post at Family Research Council.

As to whether or not Josh’s wife Anna knew: She did. In fact, she too released a statement saying that she was made aware of his past mistakes early on in their courtship. “When my family and I first visited the Duggar Home, Josh shared his past teenage mistakes. I was surprised at his openness and humility and at the same time didn’t know why he was sharing it. For Josh he wanted not just me but my parents to know who he really was—even every difficult past mistakes [sic].”

The response among the public has varied; the majority have expressed outrage. Certainly justice should be served. The charges are severe, his confession disheartening. Josh Duggar should be held responsible for his actions.

But quite frankly, it appears he has.

Though reportedly a “dark and difficult time,” Josh willingly came forward and confessed; his parents took the information—about their own son—to the proper authorities; they ensured that Josh and his victims received the proper counseling; and they didn’t hide the truth from those who mattered most: like his future wife.

Anna expressed sympathy for those learning the truth for the first time, saying, “I can imagine the shock many of you are going through reading this. I remember feeling that same shock.” She went on to say that, “. . . when Josh asked me to marry him . . . I was able to say, ‘Yes’ knowing who Josh really is – someone who had gone down a wrong path and had humbled himself before God and those whom he had offended. Someone who had received the help needed to change the direction of his life and do what is right. I want to say thank you to those who took time over a decade ago to help Josh in a time of crisis.” The couple are set to celebrate 6 1/2 years of marriage and are expecting their fourth child.

Josh continues to stand remorseful, calling his past “inexcusable.” And it is.

But is it unforgivable?

“I would do anything to go back to those teen years and take different actions,” Josh said. “I sought forgiveness from those I had wronged and asked Christ to forgive me and come into my life. In my life today, I am so very thankful for God’s grace, mercy and redemption.”

On the cross, Christ carried every single “inexcusable” sin. And as He bore the tremendous weight of each offense, God the Father turned His face from the Son. Since the beginning of time, they were one and existed in complete harmony. But then, in that moment, the foundation of the Trinity shook beneath the massive weight of sin.

All of it was forgiven. All of it. The only “unforgivable sin” is an unrepentant heart.

Those are hard words to swallow—especially in instances of child abuse—but this is what Christ does for us daily. And Scripture says, “But if you do not forgive others their sins, your Father will not forgive your sins” (Matthew 6:15).

As one Facebook follower wrote, “I was molested for many years when i [sic] was a young girl and the man that did that to me, still to this day, DENIES every bit of it. For Josh Duggar to own up to his mistake and to repair the damage done to his own mind and to make amends with the people he did this to, i [sic] think shows a lot of courage and strength.”

This isn’t to excuse Josh’s actions by any means. But if we are to embody Christ, are we not to extend grace as He did? It doesn’t mean there aren’t consequences for the offender. There are.

But to refuse to extend forgiveness . . . isn’t that “unforgivable” given the grace extended to us on the cross? Sin is sin in the eyes of Christ. Each sin—whether a lie or murder—nailed His flesh to that tree. Who are we to pass judgment? Who are we to cast the first stone when the person accused turned himself in, admitted his guilt, sought help for himself and those he harmed, and is once again humbly admitting his “inexcusable” mistake?

What do you think: are Josh’s actions forgivable?

**NOTE: This is a breaking news story, and we have done our best to distill the information available to us at this time. We will do our best to stay on top of the latest developments as the story continues to evolve and more information comes forward.

is a freelance writer and contract copywriter who lives in the seacoast region of New Hampshire with her husband, Eric-Thomas,of five years. She currently serves alongside her mother as the Marketing Director for God’s Girls Christian Store and More, a online retail store serving the southern New England region. Her work has been featured in several print and online publications, and she is the recipient of two Faithwriters’ Editors Choice Awards for her short stories, which are scheduled for publication in the Mixed Blessings series. Her first book, Fragile: 30 Days of Hope for the Anxious Heart, is now available at samanthaarroyo.com. She can be reached at [email protected].
Previous Wait On God; He’s Not Too Busy
Next Six Responses of Christians To the Culture of the Last Days