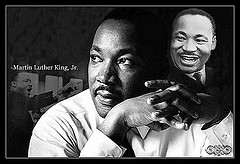 A king of valor, might, and humility
With much determination he stood against incivility
This King didn’t carry a scepter or wore a crown on his head,
He wore a robe of patience and carried a Bible instead

Though this dignitary wore no crown, he wore many hats
He was a loving husband and a father who raised no brats
Raised in a Baptist church, he grew up to be a Preacher,
Being a civil rights activist made him a persuasive Teacher

This King didn’t believe in the language of war to get his message across,
But used his belief and intelligence which showed he was a great boss
He fought for peace and justice without throwing a fist,
Changed lives and inspired hearts, yet an arm, he didn’t twist

He was a man of God and a leader with great faith,
Who delivered a famous speech in 1963 on August 28th
“I Have a Dream” was the title of that captivating speech,
It requested an end to slavery, plus freedom and equality for each

The Southern Christian Leadership Conference he helped to form
Though he didn’t win every battle, he never ever accepted the norm
This civil rights activist was right on board the Montgomery Bus Boycott,
Leading protests in Birmingham, so in the light their needs could get a spot

Standing for justice and equality got him arrested 29 times,
Resisting discrimination and demanding respect were his crimes
He got a Nobel Peace Prize in 1963 for carrying the nonviolent torch
And assisted with the organization of the Selma to Montgomery march

Today we remember the life and work of a civil rights icon
In a world of segregation he shone like a bright beacon
This great king is no other than Dr. Martin Luther Junior
A man of honor, a man of power; we salute you Luther

How has Martin Luther King inspired you today?

“And we know that for those who love God all things work together for good, for those who are called according to his purpose” (Romans 8:28)

Amelia Brown is from the beautiful island of Jamaica. She is a 28 year old Guidance Counselor by profession, but a passionate writer at heart. Most of her articles written are aimed at stimulating positive change under the guidance of the Holy Spirit. She is also a published poet and a member of Faithwriters. Outside of writing, she enjoys volunteering, cooking, and turning frowns right side up. Amelia currently lives in New York.
@ameliambrown
Previous Let’s All Have A Dream!
Next Living In the Half-Light