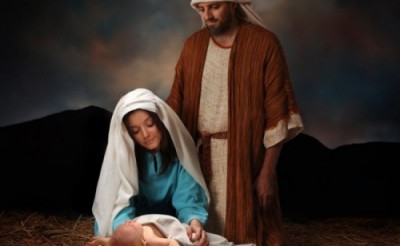 He woke up startled. The beads of sweat that formed across his forehead, ran down the side of his face. Breathing heavily, he listened to the sound of his heartbeat echoing loudly in his ears as he tried to calm himself. He sat up in bed and replayed the dream he just had over and over in his head. Is this real? He thought. Surely I cannot marry a woman who is already pregnant. Sigh. Yet, not my will… I’m certain He knows what He’s doing. If he says it, I’ll do it. (Matthew 1:20-21)

Wrapping the worn out rope around his hand, he guided the donkey that was carrying his pregnant wife. The blisters on his dusty feet hurt from walking for so long, but he had to keep moving. They were taking a census in his hometown and he had to go for registration. There was no way he was going without his expecting wife. (Luke 2:1-4)

His tired eyes grew bright as baby Jesus smiled up at him. He knew he would love him forever, and take care of him as his own. He has been through a lot, but the worst was yet to come. When it came, he held to his words and protected the child from King Herod who wanted him dead. He had to flee to Egypt, but he did what he had to, in order to protect his family. (Matthew 2:13-14)

That man was Joseph, the earthly father of Jesus Christ. He doesn’t get much recognition during Christmas seasons, but Mary could not have done it all without him. He was truly an amazing man. He didn’t have to do what he did. In fact, how many men would stay with a woman who is having someone else baby–much more marry her? Joseph not only took on the responsibility, but he did it with a good attitude.

1) He’s the world’s best step-dad
2) He was loyal and dedicated
3) He was God-fearing, humble, and obedient
4) He’s every woman’s dream…supportive, self-sacrificing, faithful, and hard-working

Amelia Brown is from the beautiful island of Jamaica. She is a 28 year old Guidance Counselor by profession, but a passionate writer at heart. Most of her articles written are aimed at stimulating positive change under the guidance of the Holy Spirit. She is also a published poet and a member of Faithwriters. Outside of writing, she enjoys volunteering, cooking, and turning frowns right side up. Amelia currently lives in New York.
@ameliambrown
Previous For KING & COUNTRY Nominated for Two Grammy Awards
Next Are You Good Enough For Heaven?