Breaking News
Home / Faith / A Warrior-King, Not A Carpenter! 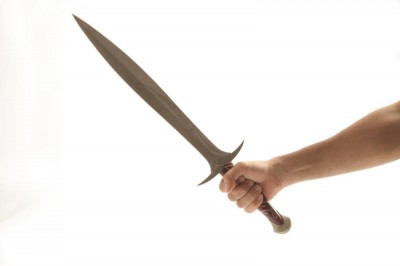 A Warrior-King, Not A Carpenter!

In A.D. 33, a crowd of Jews shouted fiercely for the death of a man named Jesus from Nazareth. Oppressed by the Romans, proud of their moral laws, awaiting a mighty savior – unbelieving Jews hated Jesus.

Jesus was merely a carpenter. He healed a Roman’s son and helped the Samarian half-breeds; he dared to call the Jewish leaders – the very descendants of Abraham – white-washed tombs and a brood of vipers.

Worst of all, Jesus claimed to be the Son of God and the King of the Jews.

But everybody knew that he was only the son of Mary and Joseph from Bethlehem, not God. How would being born of God even be possible? And it was not a secret that Jesus had been born in a barn.

Pay to Ceasar? You, Jesus, are not a king. Our King will make Ceasar pay!

The rage of offense and disappointment drove many Jews to demand the release of a known criminal in exchange for the death of an innocent man, Jesus. They wanted a King to mete out justice. They wanted a Warrior-King to overthrow their Roman oppressors. And most especially, they wanted revenge.

Sounds like these Jews could have written some of the Hollywood scripts that are so popular these days.

I understand. I have struggled with the same desire for revenge. Given a conscience by God, we are born with the ability to know right from wrong. We have a sense of justice and can feel (though perhaps not articulate until later) when we are being wronged. Yet, God admonishes us not to take our own revenge, but to trust Him entirely with justice.

We can know right from wrong, but we will never be able to act as a judge. We cannot take our revenge and in doing so become a judge over another because we are all equally diseased by sin, which mars our ability to act with true justice. Nor do we selflessly love each other as God does.

We are to forgive. Jesus came so that we could be forgiven, and then to enable us to forgive those who hurt us. His message of salvation was not what the Jews wanted to hear. They didn’t believe that they needed forgiveness as much as the Romans. They didn’t know that receiving their own forgiveness would change everything for them.

They didn’t understand that Jesus was a Warrior-King, dying for and fighting for human souls, their souls:

He will arouse His zeal like a man of war.

He will utter a shout, yes, He will raise a war cry.

He will prevail against His enemies.

How do you see Jesus of Nazareth?

lives in Minnesota where the winters are long and harsh, white and beautiful (think Frozen). She loves writing Christian fiction and has published a book about the steadfast working of God's love and truth in the midst of personal, relational, and national turmoil - Kingdom Horizon. Check it out! Along with other TBL writers, she is a member of faithwriters.com. She also likes being with children and works as a substitute teacher. Thanks for reading this and hope you are blessed by The Bottom Line website.
Previous Our Hope: The Heart of the Wise
Next Eyes That See