Breaking News
Home / Faith / Are You Scared Of The Future? Psalm 91 To The Rescue! 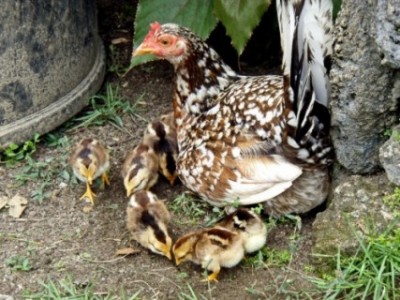 Are You Scared Of The Future? Psalm 91 To The Rescue!

During the summer between my Freshman and Sophomore year of college, I had the privilege of being a camp counselor at a farm camp.  We had all kinds of domestic animals.  I will never forget the day I witnessed the speckled hen urgently call her chicks.  They ran to her with alarmed chirps, not one lagged behind.   Each fuzzy little chick squeezed underneath the hen’s feathers and after a moment all I could see was a speckled hen with at least 20 little legs coming out from under her.  Having no camera, I missed a Kodak moment, but that picture is forever embedded in my memory. Had a hawk been after those chicks (and maybe it was) it would have missed a chick dinner that day because mama hen entered in to protect her own.  The chicks believed in her enough to obey the call and race to the assurance of safety and comfort under her wings.  Psalm 91:4 speaks of this very example.

Our God is a capable, all mighty, God.  Believe it or not, He has every big and little thing under control.  Every thing!  Not only is it under control, but He made arrangements generations ago addressing this very time in space with all it’s unrest.   Societal circumstances may have us shaking in our boots, but just like a loving mother or father would comfort their child and give assure of her safety as the storm rages outside, so does God comfort us.  He knows our bent toward fear, so He sent a special letter ( several, in fact) giving us His personal word of assurance and safety.

In Psalm 91, God calls us to Himself – the safe place.  When the devourer (in the form of contagious disease, terror, destruction, harm, etc.) comes into our midst, God is our defender and protector…our fortress and refuge. (Psalm 91:2-3, 5-6)   Our part is to be obedient and run to Him when He calls…no lagging behind in unbelief.  He assures us that He will give His angels charge over us. (Psalm 91:11-12)  We can prevail over dangerous circumstances and various challenges, large or small. (Psalm 91:13)

Have you read Psalm 91 lately?  Take the opportunity to read or re-read it and begin by saying your name right before you start verse one.  Make this psalm personal.  Where it says “you” or “thee” read “I”or “me” making appropriate adjustments to personalize it.  Read it out loud.  Read it at least 3 times or until you begin to believe the message that God has YOU covered.

Again I ask, are you scared of the future?  Personalize Psalm 91, read it through 3 times, BELIEVE it, and then you probably won’t need to call me in the morning.

I just love walking outdoors - day or night. I identify most with the creative side of God and am energized by His artistry all around this world. He amazes me every time I turn around! Yeah, God and thank you, Jesus.
Previous When The Laughter Stops
Next Weeds Are My Enemy