Breaking News
Home / Faith / Bringing the Curses of God Upon Ourselves 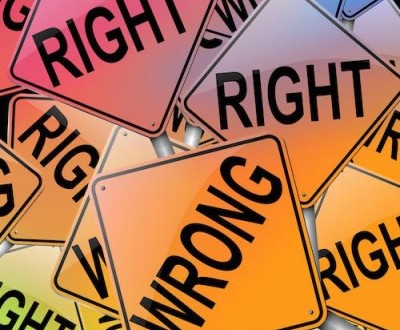 Bringing the Curses of God Upon Ourselves

Western civilization, the civilization built upon the foundations of the Christian faith, is dying a slow death. We are being punished for willfully turning our backs on God. Once we had the blessings spoken of in Deuteronomy 28 such as prosperity and having great nations; now we are suffering the curses of God for our disobedience.

At one point we practically ruled the world. We were more advanced than any other people on earth, but we let spiritual disease in the form of secular humanism, Marxism, atheism, feminism and the depraved entertainment industry infect our society and lead us away from God. All of these spiritual diseases have drowned out the voice of the Holy Spirit to the point that we can no longer collectively hear the laws God has written upon our hearts and minds; the result of this is that we cannot tell the difference between good and evil.

God warned us in Deuteronomy 28:15-68 what would happen if we violated His laws and we are seeing the curses we are are bringing upon ourselves start to manifest. For example:

Western nations are no longer reproducing at replacement levels and our food chain has been poisoned with additives, excessive hormones, GMO’s and sugar content so high there is a diabetes epidemic along with a massive increase of other health problems related to the foods we eat.

Deuteronomy 28:28 “The Lord will strike you with madness and blindness and confusion of mind.”

Western society is seeing a major rise in mental illness, from teenage girls cutting themselves, to depression, to those so confused about themselves boys are thinking they are girls and girls thinking they are boys, not to mention the liberal attitude that reinforces such confusion, we are looking at a society that has gone over the deep end and is being swallowed up in madness. What is worse is that most of us do not even see the insanity that is right in front of our eyes and so we can do nothing about it.

Governments in Europe are covering up the massive number of rapes being committed by “refugees” (most are economic migrants) because they think it is wrong and racist to object to having one’s mother, daughters, sisters and wife raped by Muslims.

Europe and North America are being slowly taken over by foreigners, governments are confiscating land and giving it to these newcomers and theft through taxation, which goes to support these newcomers also prevents people from enjoying the fruit of their labor.

Deuteronomy 28:32 “Your sons and your daughters shall be given to another people, while your eyes look on and fail with longing for them all day long, but you shall be helpless.”

Our children are being raised by the state instead of by their parents, who are, more often than not, both working. The secular state is using this influence to warp and destroy the traditional values of our Christian heritage. Today, parents have become or are becoming nothing more that financial support, while the state has become the real parent, shaping the values imparted to children.

A quote from the theologian R.J. Rushdoony explains it well: “To control the future requires the control of education and of the child. Hence, for Christians to tolerate statist education, or to allow their children to be trained thereby, means to renounce power in society, to renounce their children, and to deny Christ’s Lordship over all of life.”

And that is what we have done, we have renounced Christ’s lordship over our nations and as a result we are bringing these curses upon ourselves.

Those are just the most obvious, but there are more examples and even more curses are on the way unless there is a new spiritual awakening and we all turn back to God and reject the evils that we now praise as good. Things like moral relativism and the ideological consequences of that relativism such as tolerance of immoral and outright evil behaviour, state enforced equality which lowers all standards, atheism, abortion, the filth coming out of Hollywood and so much else needs to be driven out of our society, just like Christ drove the money changers out of the temple and we must embrace God once more. All of the west needs to collectively fall on our knees, repent and ask Jesus to forgive us. If we do not, if we continue to disobey, if we continue to ignore the laws of God, we will be destroyed, just as the Bible tells us we will be.

Deuteronomy 28 is a warning, we can obey the laws God has written on our hearts and minds and receive His blessings or we can do what we want and sin and bring nothing but curses upon ourselves.

Galatians 6:7 “Do not be deceived: God is not mocked, for whatever one sows, that will he also reap.”

How do you feel about the moral decline of western society? What do think is the answer?

Jonathan Kotyk is a student, self taught philosopher, recovering addict and born again Christian. He has spent time on both the far Left and Far Right side of the political spectrum and lives in Canada.
Previous Are You a Modern Day Eve?
Next Loving Like Jesus: It Is Possible!