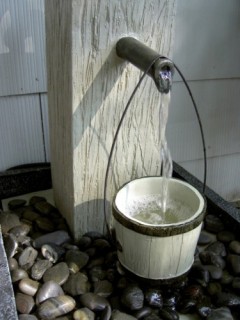 Leave The Bucket Behind

“If being baptized by water saves you, as some religions claim, then why are we not dumping buckets of “holy water” on people everywhere?”

Being raised in a religious household with this exact idea, and having been baptized as a baby, the question caught me off guard and started to stir in my mind.  Why are we not throwing buckets of “holy water” on people if that’s all it takes?

As the idea began to sink in, I started to chuckle to myself while I envisioned people walking around dumping buckets of water on some well surprised and sopping wet people. In all seriousness, this subject area can become highly controversial since it is one that some religions make their claim of salvation.  So, let’s take a closer look to see how God’s words are truly meant.

In Matthew 3:2 John the Baptist was calling people to repentance “Repent, for the kingdom of heaven is near.”  And so “people went out to him from Jerusalem and all Judea and the whole region of the Jordan. Confessing their sins, they were baptized by him in the Jordan River.” (Matthew 5-6)

Notice that prior to their dip in the water, they “confessed their sins”. What does it mean to confess?  According to Merriam Webster it means “to admit that you did something wrong or illegal” So before plunging their entire body into the Jordan, each one admitted that they had done something wrong against God. The same truth is told from the perspective of Mark 1:4-5 and Luke 3:1-8 however, in Luke 1:3 the words read, “…preaching a baptism of repentance for the forgiveness of sins.”

Wait a minute! Luke’s perspective says that John preached about a baptism of repentance and nothing is mentioned about confessing before being baptized, so isn’t being baptized in water the same?  Can’t water alone lead to salvation? No, it cannot. Take a look at the word repent which means “to turn from sin and dedicate oneself to the amendment of one’s life” (Merriam-Webster).In other words,  a repentance must take place in the heart before diving into the water.  Water alone does not save you.  Not even water that is called “holy water.

As a side note, John was baptizing people in the Jordan River.  The river which was commonly used by everyone.  There was absolutely nothing holy about it until Jesus entered in, but even when Jesus entered the river, it was the Holy Spirit, not “Holy Water” which came down from heaven that baptized him.

Water alone is not the way to salvation.  It is a choice that each individual must make on their own. You can submerge yourself as much as you want and as many times, but unless there is an admittance of the sin you have committed and a willingness to repent and turn away from your sinful life, you’re merely taking a lukewarm bath.

is an author and editor for The Bottom Line Ministries as well as a member of Faith Writers. Currently she teaches high school language arts. She is a mom to four amazing blessings and enjoys every moment life has to offer. Renee has a fervor and drive to learn, she loves to read and spend time with her family, and is involved with her local church ministries. Humbled by God’s gift of words, she has a passion to write what the Holy Spirit has placed in her heart. She hopes to publish her in-progress book someday, but in the meantime, is honored to be placed as part of the TBL writing family and is holding on to the ride wherever God is leading. Renee and her family reside in their country home in Holland, Iowa.
Previous Don’t Buy What They’re Selling
Next I quit!