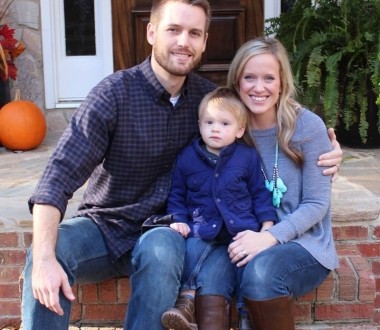 North Carolina worship pastor at Forest Hills Church, Gentry Edding lost his two sons in a car accident on May 23, 2015. His wife, Hadley who was 8 months pregnant at the time was traveling with their two-year-old son, Dobbs, in a separate vehicle. Gentry had just presided over his sister’s wedding when a box truck struck the car carrying Hadley and their sons.Their two-year-old son, Dobbs died in the accident, while Hadley was rushed to the hospital where an emergency C-section was performed, and baby Reed was born, but tragically he only survived a few days. Gentry and Hadley were holding baby Reed when he went to heaven with his brother. Their sixth year wedding anniversary was on the day of this terrible tragedy.

On the day before Dobbs’ accident, he recited Psalm 46:10: Be still and know that I am God. His father had taught him this scripture before, but it was on that particular day that Dobbs recited the entire scripture. How comforting this must have been to these grieving parents.

As heartening as it may have been, Edding has offered forgiveness to the 28-year-old truck driver Matthew Deans that killed their two sons. It was not easy to extend forgiveness, but he knew that Jesus had forgiven his debt so it made it easier to forgive this man who caused the death of their two precious sons. At the funeral for his boys, Gentry called on the congregation to forgive Deans and anyone else they need to forgive. The Eddings thought about how difficult it must be for Matthew Dean and the burden he has in his heart

Gentry and Hadley do not understand why this tragedy happened, but they want God to be glorified through it all. Although they are grieving they still have hope and look forward to the day when they can be reunited with their boys in heaven.  There are times they are mad about the losses, but believe they can trust God with it all.

The Eddings believe that God has their boys and they are at peace. Gentry is at peace and feels that God has a plan in the suffering and sorrow, and he believes that God is still good. Gentry and Hadley are on a journey and feel they cannot plow through this time of grief. They cry a lot and Hadley’s “arms feel empty.” Their house is quite and they are adjusting to little Dobbs not coming to wake them up every morning, or hearing the laughter he was so full of. Hadley knows in her heart that if God spared her life and Gentry’s He must have something left for them to do here on earth.

They are asking that the legacy of their sons inspire others to help transform the nation of Haiti and that donations go to Mission of Hope Haiti, an organization they both worked for in the past.

The Lord is close to the brokenhearted and saves those who are crushed in spirit. Psalm 34:18

What a truly inspiring and uplifting story. What parts of their story cause your faith to soar?

Would you join me in the comment section offering prayers to this family? Let our prayers extend around the world and bring comfort, peace, strength and hope to the Eddings.

Stephanie has a heart and passion to see broken lives restored and redeemed through Jesus Christ. She writes through her personal experiences and her educational and professional background. She has over 17 years experience in counseling, and has a Master's degree in Social Work, Bachelor's degree in Psychology, and is a Licensed Belief Therapist. Stephanie has been married for 16 years,and has one grown son. Stephanie's desire through her writings is to bring hope and encouragement to the body of Christ, that no matter what you have been though or going through, there is restoration and redemption through Jesus Christ.
@Stephrreck
Previous Josh Wilson’s Newest Album Tops the Charts
Next Constant Arguments and 5 Ways to Reduce Them