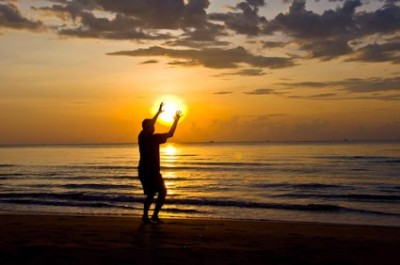 Peter and John walked up to the beggar at the gate called beautiful. Little did this beggar know that the power of Jesus Christ was about to make His life beautiful. Peter and John walked closer to the beggar. They did fix their gaze on him. Naturally, the beggar thought he was going to get a monetary handout. Praise God he received so much more than he bargained for. Peter announces to him that they didn’t have Silver or Gold but what they did have they will give to him. Arise in Jesus name here is the account:

“Now a man who was lame from birth was being carried to the temple gate called Beautiful, where he was put every day to beg from those going into the temple courts. Now Peter and John went up together into the temple at the hour of prayer, being the ninth hour. And a certain man lame from his mother’s womb was carried, whom they laid daily at the gate of the temple which is called Beautiful, to ask alms of them that entered into the temple; Who seeing Peter and John about to go into the temple asked an alms. And Peter, fastening his eyes upon him with John, said, Look on us.  And he gave heed unto them, expecting to receive something of them.  Then Peter said, Silver and gold have I none; but such as I have give I thee: In the name of Jesus Christ of Nazareth rise up and walk. And he took him by the right hand, and lifted him up: and immediately his feet and ankle bones received strength. And he leaping up stood, and walked, and entered with them into the temple, walking, and leaping, and praising God.” Acts 3:1-8

The power of God hits the beggar’s lame legs and he is never the same. The man’s legs were instantly strengthened and he leaped and praised God. He hung on Peter and John’s arms and walked into the temple. This beggar had been lame since birth. Instantly Jesus heals his legs and resurrects his life in a sense. Arise in Jesus name the key phrase Peter said to the lame man that changed everything. The man could now go out and earn his own money. Because of four short words “Rise up and walk”, his life was changed forever. Faith must be united with this phrase for the Lord to be able to perform the miracle. Peter declared the phrase in faith and the lame man received the miracle in faith. James says:

“But someone will say, “You have faith; I have deeds.” Show me your faith without deeds, and I will show you my faith by my deeds.” James 2:18

Peter shows us his faith by his deeds; so we can show the world our faith by our deeds in Jesus name. Let us get out there and declare “In Jesus name rise and walk.”

Where can you go and command somebody to rise and walk in Jesus name?

Greg is a born again believer who testifies to the absolute transforming power of God's word. Greg has been called to full time ministry and He has known Jesus for most of his life. Greg received his degree in Pastoral Ministries from what was formerly Bethany University in Santa Cruz,California. View Greg blogs on iwriteforjesus.com. Greg has a book published on " To Jesus Christ the High Priest of my confession: A personal Testimony." find it on http://www.amazon.com/Christ-Priest-Confession-Personal-Testimony/dp/1507706847/ His testimony in short form is published in "Trials and Triumphs II" on http://www.amazon.com/Trials-Triumphs-II-FaithWriters/dp/1498416012/. This book is filled with 50 inspirational testimonies and is a project of Faith Writers.
Previous What’s the Problem with Sugar?
Next Nothing Can Hinder God’s Unique Moves On Our Behalf