Breaking News
Home / Faith / The Battle Over The Rainbow 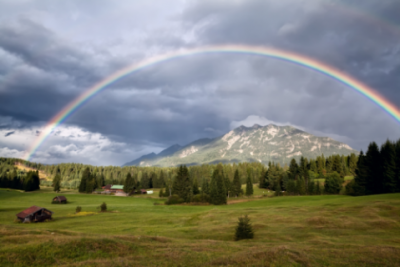 The Battle Over The Rainbow

Friends, since the recent decision by the Supreme Court on gay marriage, there has been a fight “over the rainbow”, including who it belongs to and what it’s supposed to mean. Rather than declare who I believe it belongs to, I’m going to suggest there is much difference between the two rainbows and they both serve a purpose.

The Origin of the Rainbow

Before I begin doing a comparison, I would like to point out a few facts about the rainbow, including the origin. The rainbow was originally established after Noah’s flood, and was put up in the sky by God as a promise to man that He would never again flood the entire earth.

Gen 9:13-15 I do set my bow in the cloud, and it shall be for a token of a covenant between me and the earth. And it shall come to pass, when I bring a cloud over the earth, that the bow shall be seen in the cloud: And I will remember my covenant, which is between me and you and every living creature of all flesh; and the waters shall no more become a flood to destroy all flesh.

The rainbow is also a natural miracle that takes millions of raindrops working together to form. This happens when these raindrops reflect and bend sunlight at just the right angle. You won’t see a rainbow every time it rains, but when you do, they’re a beautiful sight to behold.

God’s rainbow actually forms a perfect circle, but half of the rainbow typically wouldn’t be viewable by the human eye.

A popular and easy way to remember the colors of the rainbow is by the following mnemonic formula, “ROY G BIV.”

*Note: Indigo isn’t specifically mentioned in the Bible, so I did some research and popular belief is as mentioned. Check the website here for further explanation.

Now if you haven’t noticed, there are some major differences between the two rainbows and what they mean. First, God’s rainbow has 7 colors and the gay pride rainbow only has 6. The meaning of each color also has a significantly different meaning. Aside from the number of colors, the two differences that stood out to me the most are as follows:

* The color purple (or violet), which represents God’s sovereignty is replaced with “spirit.” in the gay rainbow. What or whose spirit is this referring to?

* The color which the gay pride rainbow omits is indigo, which represents God’s mercy and covering.

In God’s rainbow it is important to note that we do not see black and white. This is because white is broken down into the other colors, and black is the combination of all the primary colors, which creates an absence of light. So what do these hidden colors mean?

The first gay pride flag was designed by Gilbert Baker and it contained 8 colors. Two were removed, and turquoise was changed to blue to represent “art” in their modern flag. So what did pink and indigo represent?

So my question is why was one of the predominant themes with the gay community removed? And why was their symbol for harmony removed? I find it fascinating that the color that is thought to represent God’s covering and mercy was removed from their flag.

It’s no secret that the number seven represents God’s completeness and perfection We see this throughout the Holy Bible. In fact, “seven” occurs in the bible an astounding 287 times.

So what about the number 6? Well, six is commonly thought of as the number of man, and has also been used to mark the enemies of God, especially those that try to honor man above God. Let’s look at some examples.

Goliath was marked three times by the number six. This included his spear weighing 600 shekels of iron, 6 cubits in height, and 6 pieces of armor (Sam 17:4-7).

Nebuchadnezzar was marked likewise when he erected his image. The image was 6 cubits wide, 60 cubits high, and worshipped with 6 instruments (Dan 3:1,5).

And of course we all know the number of the man of sin, also known as the antichrist, whose carries the mark of the beast which is 666 (Rev 13:18).

So what is happening in American with gay marriage and the Obama Administration? Is there possibly a link to the number six? Let’s take a look at what I have found.

* Gay marriage was approved by the U.S. Supreme Court on the sixth year of Obama’s administration.
* Gay marriage was established in the six month of the year (June).
* It was established on a Friday, the sixth day of our week.
* It was established on the only Friday in June ending with a 6 (June 26). Also, worthy of note, this was done on the same day of the year that Christmas was officially declared a national holiday (June 26, 1870).
*After the Supreme Court’s decision, the Whitehouse displayed the 6 colors of the gay flag.
*Obama’s keyword for his presidential run was a six-letter word (change).
*Obama was born on August 4, the 216th day of the year (6x6x6).
*Obama declared Honolulu, HI as his place of birth (21.6 N Latitude).
*Obama care was passed with a required 216 votes (Usually requires 218).
*Obama took back precisely 216 $7500 scholarships that were awarded to low income students through the D.C. Opportunity Scholarship program.
*Obama claimed to deport 216k immigrants with felonies.
*Obama established himself in Chicago and even taught “CONSTITUTIONAL LAW” at the University of Chicago Law School. In addition, he campaigned for the United States House of Representatives and for President out of Chicago (Zip Code: 60606).
*The day following Obama’s election, the winning Pick 3 number in Chicago’s lottery was 666.
*Barack Hussein Obama has 18 letters (6+6+6).
*Six days, six hours, and six minutes after Obama’s Day of Inauguration, there was a solar eclipse that occurred.
*On Feb 5, 2014, it was reported that the national debt was up $6.66 trillion since the Obama inauguration.
*On his 666th day in office, Obama appointed 6 judges to the Circuit Court.

The rainbow is certainly an important symbol in the Christian faith and in the gay rights movement. Symbolism also plays a key role in identifying ourselves as individuals. No matter what side of the fence you’re on with all this, God still loves you and wants to bring into His kingdom. As far as the numeric symbols I discussed, I will let you decide what you want to believe about them, but would certainly like to hear your thoughts on it. Thank you for reading and God bless.

What are your thoughts on God’s rainbow and on the gay pride rainbow?

Joel M. Bauer is a 45-year-old U.S. Army Veteran from Dunn, NC, which is just outside of Raleigh. After being honorably discharged from the U.S. Army, he attended school at Taylor University, a Christian liberal arts school, in Fort Wayne, IN, where he received his BS in social work and psychology. He has worked in such places as a homeless shelter, a community based treatment center for severe mental illnesses, a school for troubled students, and other social service agencies. His current endeavor is to build The Bottom Line website into a site that inspires both Christians and non-Christians alike, and brings glory to God.
Previous Are Christians Going To Live By The Bible Or Not?
Next The “Real” Supreme Court Shall Issue Their Decision