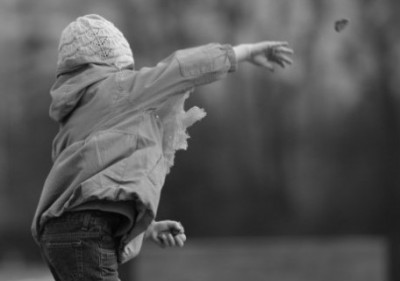 Wow! What a Throw!

Who is a God like unto thee, that pardoneth iniquity, and passeth by the transgression of the remnant of his heritage? he retaineth not his anger for ever, because he delighteth in mercy. He will turn again, he will have compassion upon us; he will subdue our iniquities; and thou wilt cast all their sins into the depths of the sea. – Micah 7:18-19

Yesterday, I had the opportunity to meditate on this promise that, once we confess our sins, God will cast them into the depths of the sea, never to be remembered again. What a comfort! What a blessing to know that when Satan stands before God and accuses us of wrongdoing, God can honestly say, “I don’t remember that.” It’s not that He’s forgetful, but rather that He chooses not to remember. He makes a point to cast them away, and because of that, we can walk each day in newness of life.

But in the midst of my meditation, a sobering thought struck me. What if God casts our sins the same way we cast our cares? First Peter 5:17 instructs us, Casting all your care upon him; for he careth for you. According to the dictionary, the definition of the word “cast” is “to throw or move something forcefully; to send or direct something in the direction of someone or something.” When God casts our sin into the depths of the sea, I believe the first definition comes into play. When we cast our cares on Him, the second definition is in order.

However, too often, we cast our cares like a fisherman casts his net or fishing line. We throw it forcefully in God’s direction, then reel it right back in. We give them to God, but for some reason, we have trouble leaving them there. Why do we do that? Don’t we realize that God can handle our problems far better than we ever could? Do we not understand the peace and joy that comes from living stress-free because we’ve cast our cares on the Lord? What will it take for us to realize that He longs to bear our burdens? He doesn’t consider it an imposition, but rather a privilege. So who are we to deny Him that?

Thankfully, we have Biblical proof that when God casts our cares, it is according to the truest definition of the word. Psalm 103:12 tells us, As far as the east is from the west, so far hath he removed our transgressions from us. They are truly cast away, and God will never pull them back again. Shouldn’t we do the same with our cares? When God commands us to cast them on Him, would it not be prudent for us to cast them in the truest sense of the word and leave them there? After all, if the definition is good enough for God, it’s certainly good enough for us.

Whatever you may be facing today, you don’t have to bear that burden alone. In fact, you don’t have to bear it all. Cast it on the Lord. His strength will sustain you, and His mercy will cover you. As for your troubles, let Him deal with them. This is the God who created the universe and all that is within. He’s bigger than any problems we may have.

Tags as far as the east is from the west casting our cares don't fear don't worry giving your problems to God God casts our sins I Peter 5:7 Micah 7:18-19 Psalm 103:12 sea of forgetfulness trust God What a Throw!

Dana is a full-time Christian author and speaker residing in Greenville, SC with her husband and two dogs. In fulfilling her call to evangelize the lost and edify the saints, Dana spends her days writing devotions, devotional books and books for children, as well as recording podcasts on various Biblical topics. She serves in many capacities at her local church, including the roles of church pianist and ladies' Sunday School teacher. Dana has a passion for souls and longs to be used of God in whatever way He deems necessary. When not writing or serving at church, Dana can most likely be found reading or hiking a nearby trail.
Previous Talking Veggies!
Next Christmas Time Is Here