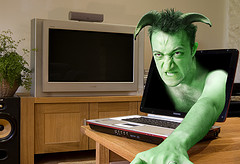 He stole it all. This monster took

I’ve heard of hacking happening to others, but I didn’t know it would have happened to me. I admit, I pitifully went into the “Why-me” phase. But quickly got over it however, and moved on to asking myself “Why-not?” I guess I had unrealistic expectations thinking hackers only target the rich and powerful—after all, they would stand to gain more. Nevertheless, my perception  got a makeover when he took over my email account. Yes, little ole me! I look at it as a harsh reminder that anyone is susceptible to anything.

It started when I got a weird text from a friend Friday morning. She was asking me what’s wrong, and if everything was OK. I was puzzled…until I got a phone call that explained everything. A hacker/s had hacked into my email account, and was sending messages to my contacts requesting money. Devastation became my state of being. I felt violated and naked knowing that my privacy has been breached, and my personal information was now in the hands of a criminal. I changed my password thinking that was enough. Unfortunately, it wasn’t. He had already created another email account with my name, stole all my contacts, and was forwarding all my incoming mails.

Hackers repeatedly ruin people’s lives by the click of a button, with little or no remorse. They honestly don’t care. For many, it’s just a job. The deceiver that stole from me is someone’s child, brother, girlfriend, cousin, or husband. He may even have children. Sadly, his family may be clueless. Hackers often pretend to lead a normal life, but they are wolf in sheep clothing.

“…, hypocrites! For you are like whitewashed tombs, which outwardly appear beautiful, but within are full of dead people’s bones and all uncleanness.” (Matthew 23:27)

As hard as this has been for me… I have to practice forgiveness. I have to look pass my anger and the damage that has been done. I may not be a hacker, but I too have done some un-Christ-like things. Yet, God showed me mercy, and He expects me to do the same—however hard it seems.

I have forgiven the hacker, and needless to say, God is quick to forgive Him as well. He said “If we confess our sins, he is faithful and just to forgive us our sins and to cleanse us from all unrighteousness.” (1 John 1:9) The ball is now on the swindler’s side of the net, all he has to do is confess his wrongs and change from his evil ways. I leave him with this advice…

“If you are a thief, quit stealing. Instead, use your hands for good hard work, and then give generously to others in need.” (Ephesians 4:28)

Author’s Note: The pronoun “he/his” is used generally in this article to include both genders.

Amelia Brown is from the beautiful island of Jamaica. She is a 28 year old Guidance Counselor by profession, but a passionate writer at heart. Most of her articles written are aimed at stimulating positive change under the guidance of the Holy Spirit. She is also a published poet and a member of Faithwriters. Outside of writing, she enjoys volunteering, cooking, and turning frowns right side up. Amelia currently lives in New York.
@ameliambrown
Previous The Unrighteousness of Anger
Next When Our Emotions Run High