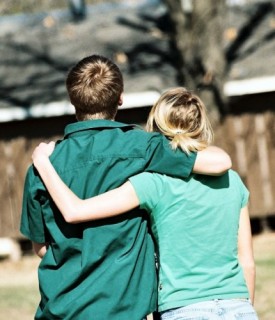 Husbands: The Hidden Secret to “Making Love” With Your Wife

Husbands have you ever settled down for the night in hopes of getting more than a goodnight’s rest, and instead you find yourself face to face with a cold shoulder or a repetitious excuse.  Has it ever crossed your mind as to why this pattern seems to continue?   I realize that I am no marriage expert, but I believe that being married fifteen years to the same man, along with countless reads from marriage books as well as several findings on marriage research, give credibility to my response.

Imagine the following scenario. Tom has been working all day long.  He comes home, greets his wife who also has been at work and is now making dinner, dealing with the kids, and trying to maintain the household.  Tom then sits down on the sofa and proceeds to watch the news.  Roughly twenty minutes later, dinner is served and the family gathers around the table.  The day is discussed and when dinner is over, everyone departs.  Tom decides to take his place back on the sofa while his wife begins the nightly routines: cleanup, bath, and bedtime.  Finally, after settling everyone in to bed, it is her turn to sleep.  Appreciating all that his wife has done with the day, Tom heads off to bed in expectations of showing his wife just how much he appreciates her.  Thrown off guard by his forward actions, his wife mumbles her frustrations and turns back around, closes her eyes and falls asleep.  Tom is left speechless trying to decipher exactly what just happened.

Tom has missed the boat.  Making love to your wife is not an event to end the evening but is to be an event that starts in the morning and proceeds throughout the day.  Now, before you let your mind wander too far, hear me out.  Love making to a woman and a man is defined differently.  To a woman the two words are inseparable.  Love is representative to showing how you care about her both physically and mentally and by contributing to her daily routine is when you are creating or making love that builds up to the evening climax in the relationship. (The physical part of the definition).  What?? That’s so silly you may be thinking, but to a woman it is not.  By contributing and becoming part of her world, you not only show that you care, but you also develop underwritten rules of communication and countless opportunities to show affection in a physical form, which has a great potential to lead to an alluring evening.  Believe it or not, woman at times just want to be held!  I know it may sound crazy, but there are times when we would prefer being held over physical intimacy, really!

God created a union between a man and a woman to supplement each other’s needs.

“Do not deprive each other except perhaps by mutual consent and for a time, so that you may devote yourselves to prayer.”(1Corinthians 7:5)

So wives, when in a healthy relationship, are not to continually use excuses to turn away from their husbands, but instead are called to meet their needs.

Gentlemen, although a woman has a godly responsibility as does a man maintaining a healthy physical relationship, that doesn’t mean you should wash your hands clean of helping out.  Instead, jump in and give it a try. Just see if a cold shoulder doesn’t become a warmed heart and an ancient excuse.

is an author and editor for The Bottom Line Ministries as well as a member of Faith Writers. Currently she teaches high school language arts. She is a mom to four amazing blessings and enjoys every moment life has to offer. Renee has a fervor and drive to learn, she loves to read and spend time with her family, and is involved with her local church ministries. Humbled by God’s gift of words, she has a passion to write what the Holy Spirit has placed in her heart. She hopes to publish her in-progress book someday, but in the meantime, is honored to be placed as part of the TBL writing family and is holding on to the ride wherever God is leading. Renee and her family reside in their country home in Holland, Iowa.
Previous Are You Healthy Today?
Next More Month Than Money? From the Blues to Good News. Pt.2