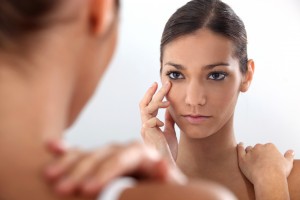 Learn to Love the Skin You’re In

We can’t change our skin like snakes do; so, learning to be comfortable in our own skin is vital. We have to love ourselves, or else others will find it hard to do it for us. The message about “loving our bodies” is worn out. Yet, people aren’t convinced. Maybe it’s because the message about “skinny being the only sexy,” is louder.

Numerous people struggle to love their bodies—a large percentage of them are teenagers. An article on Huffington Post states, “About 40 percent of 10 and 11-year-old girls in the U.K. want to lose weight. That number rises to 54 percent in 12 and 13-year-old girls and to a stunning 63 percent among 14 and 15-year-olds.” While boys are less concerned about body image, they’re not all exempt.

Teenagers who struggle to accept their bodies, are more likely to carry their insecurities into adulthood. However, if teens learn to love the body God gave them, and focus on who they are as individuals, they’ll be more self-confident as adults and less swayed by the opinions of others concerning their physical appearance. Self -acceptance is key to embracing individuality. Our self-worth shouldn’t be dependent on our skin color, height or weight. Our character and personality are what should matter the most. Until one young lady made this discovery, she hated herself:

Whitney Thore is a beautiful big girl, but that’s just one aspect of who she is. She’s also a motivated, vibrant and intelligent lady. Her video, “Fat Girl Dancing” went viral, propelling her into stardom. This video came after she learned to accept herself just the way she is. Whitney believes, “Confidence is a product of action.” Whitney wasn’t always fat. She was a medium-built professional dance instructor. The extra pounds made an entrance after she started college. She said within a year, she was 100 pounds overweight. However, she worked hard to regain her self-confidence, and now stars in her own reality series on TLC called, “My Big Fat Fabulous Life.”

Snakes crawl out of their skin, not because they envy the skin of another snake, but because they eventually outgrow their own. We too can figuratively change the skin we’re in, but it should be for the right reasons–not because the guy we’re dating says so, or because the media insists “skinny” is the best look. The decision to lose weight should be our own, after carefully considering the health risks associated with obesity. Set realistic goals and take it one day at a time.

How do you practice “self-acceptance?”

Amelia Brown is from the beautiful island of Jamaica. She is a 28 year old Guidance Counselor by profession, but a passionate writer at heart. Most of her articles written are aimed at stimulating positive change under the guidance of the Holy Spirit. She is also a published poet and a member of Faithwriters. Outside of writing, she enjoys volunteering, cooking, and turning frowns right side up. Amelia currently lives in New York.
@ameliambrown
Previous Teen: You Are a Miracle to be Discovered
Next What Word Offends People The Most?