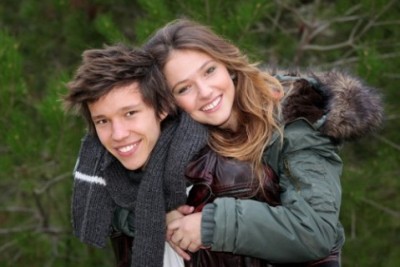 Teens today are at a higher risk of becoming sexually active at a younger age. With the world of visual media constantly interrupting thoughts and stimulating the teenage mind, the normalcy of healthy relationships are being skewed farther away from their original truths. Most are aware of the idea of waiting until you are married before engaging in sexual intercourse, but what a lot of youth are unaware of are the reasons why. Yes, of course no one wants to become a teenage parent and have to make decisions or life changing plans at a young age. However, God’s reason for demanding that intercourse should remain between a husband and a wife is because there is a spiritual bond that is create between the two. Yes, a spiritual bond. You see God’s design for sex between a man and a woman is so intimate that when the spiritual bond is created; it remains in place as a connection between husband, wife, and God. “For this reason a man shall leave his father and his mother, and be joined to his wife; and they shall become one flesh.” (Genesis 2:24).

Recent studies have shown that although teenagers are choosing to remain abstinent, they are practicing other ways to get around “having sexual” and are instead participating in oral sex. “About half of teens ages 15 to 19 report having ever engaged in oral sex with an opposite-sex partner. Among teens who have never had sexual intercourse, about one in seven girls, and one in six boys, report having ever engaged in oral sex with an opposite sex partner. (Child Trends Data Bank) More and more teenagers are likely to have oral sex as opposed to vaginal sex because they believe the outcome to be less risky and have fewer consequences on their health, and emotional or social well being. In fact, many teens do not believe there are any risks at all associated with oral sex when the reality is that there are several risks involved. “While oral sex by itself does not pose a risk for pregnancy, it can lead to a number of sexually transmitted infections, including HIV, herpes, and oral HPV.” (Child Trends Data Bank)

So why are teenagers electing to participate in these risky behaviors? “… the most common reasons listed by these youth for engaging in oral sex were: for pleasure, to improve their relationship, and for popularity or their reputation.” (Child Trends Data Bank) The one idea that the data does not point out about oral sexual activities is that when a teen participates, a spiritual bond is being formed out of the intimacy in that relationship. This may not seem to be that big of a deal now, but when you meet your future Prince or Princess, the bond of your past choices will remain causing a disconnect in the relationship with your spouse which can create a lack of intimacy leading to potential for separation or divorce.

You see, God does not want all of the people from your past to be with you when you want to be intimate in a sexual way with your husband or wife. Instead, He wants you to have a bonded relationship that is pure, clean, and holy.

“…do you not know that your body is a temple of the Holy Spirit who is in you, whom you have from God, and that you are not your own? For you have been bought with a price: therefore glorify God in your body.” (1 Corinthians 6:19)

If you have made choices that you believed were okay to do at the time but now you may feel ashamed, then the first thing you need to do is to stop continuing in those wrong choices and to bring yourself before God. Ask Him to forgive you and from here on out, make a promise to never again participate in any type of sexual activity unless it is with your husband or wife.

is an author and editor for The Bottom Line Ministries as well as a member of Faith Writers. Currently she teaches high school language arts. She is a mom to four amazing blessings and enjoys every moment life has to offer. Renee has a fervor and drive to learn, she loves to read and spend time with her family, and is involved with her local church ministries. Humbled by God’s gift of words, she has a passion to write what the Holy Spirit has placed in her heart. She hopes to publish her in-progress book someday, but in the meantime, is honored to be placed as part of the TBL writing family and is holding on to the ride wherever God is leading. Renee and her family reside in their country home in Holland, Iowa.
Previous Godly Love in Political Campaigns
Next American Humanitarianism