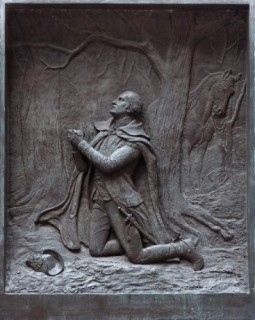 Valley Forge wasn’t the place to be during the winter of 1777-78 if you were partial to heat, sturdy clothing, and food. But this is exactly where General George Washington, along with 12,000 men fighting to gain freedom from Great Britain in the American Revolutionary War, found themselves. George Washington was a man who depended greatly on his God, and had the wisdom to understand how deeply he needed Him as he led his troops. That winter, 2,000 men would die of disease alone—and starvation was a constant threat to those who survived the deadly illnesses.

If those brave men could talk with us today, they would not doubt tell of many miracles of answered prayer as they fought for their rights to worship God as they wished, and to gain freedom from the oppressive taxes of Great Britain. Their General no doubt helped strengthen their faith in God as they watched him on bended knee, praying for the needs of the moment.

Surely their conversation would include the miracle of the “boiling” Schuylkill River. Facing starvation and in a weakened state, the soldiers were desperate for nourishment. General Washington exercised his faith, imploring God to provide food for the men. Shortly after, the Schuylkill appeared to boil. The curious men went to examine, realizing that the river was full of thousands of fish. It appeared to “boil” with their migration upstream. This made little sense, it was too early in the season for these fish to migrate…..But the starving men quickly used their available tools and scooped the fish onto the banks of the river. Soon, they were strengthened not only physically, but in spirit–knowing God had brought their answer in that “boiling” river!

Many of these events are left out of our children’s history books today. God and faith are no longer the focus in learning about the founding of our nation. But in truth, our nation would not have been founded without many faithful, Christian men and women who knew they needed God to succeed. Freedom and opportunity came with much sacrifice–and faith in God.

Another president reminded us of this truth over 200 years later: “I said before that the most sublime picture in American History is of George Washington on his knees in the snow at Valley Forge. That image personifies a people who knew that it’s not enough to depend on our own courage and goodness. We must also seek help from God, our Father and Preserver.” (President Ronald Reagan, Nat’l. Day of Prayer Proclamation, 1982.)

My husband Dan and I have three children and three grandchildren. We live in central Illinois. I am a graduate of The Institute of Children's Literature, a member of faithwriters.com, and a member of SCBWI. My writings have been published at chirstiandevotions.us, in DevotionMagazine, the PrairieWind Newsletter, and here at thebottomline.co.
Previous The Ministry Of Rescue Missions
Next OUR HOPE: Compromise