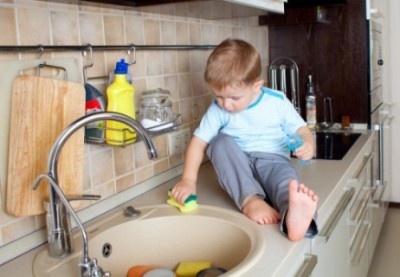 Have you ever tried to open one of those juice pouches with the orange straw and the tiny hole in the middle of the bag? You know, the kind where if you don’t hold the pouch just right, you will have a geyser spewing all the contents of the bag before realize what took place.

The other day I watched my five year old as he opened his own juice. He did a fantastic job considering how much coordination it takes just to insert the straw without overflowing the drink into your lap. The only thing he had spilled were three little drops on the floor, and I stood back in wondrous awe as he took the closest thing next to him and covered up the three drops hiding them from my view instead of cleaning them up.

You may be wondering why such a silly thing caught my attention. Here’s why. God showed me through my son’s mistake that we are no different. Sometimes we have our own little spots that we want to cover up from God. Our spots may include simple things like using God’s name as a cuss word because we don’t want to look different in front of our friends, or telling a hurtful joke that appears harmless to us, but disrespectful to the person it is about. These types of spots are just on the surface and are usually easier to clean up because they don’t leave much residue behind.

What about the spots that have penetrated deeper into the surface because they have been lingering a little too long? You know, the kind that we don’t want to take care of right away because they have already left a mark and they are more difficult to remove so it takes extra work to clean up the mess. These types of spots maybe happen when we click on that image just out of our own curiosity to see a little more than what we should really look at, or when we find a way to manipulate a situation to our own benefit.

In my son’s case, he only had three little drops of colorful liquid, which happened to fall on laminate flooring. Harmless, right because they won’t penetrate the surface as long as they are cleaned up within a reasonable amount of time. But what if I said that the Kool-Aid landed on white marble-an extremely porous material. The damage would have been devastating. It would take some extreme measures just to remove the stain.

That is exactly what I am talking about. You see God went to extreme measures for you to remove your stains, your sins. By sending his son to die on a cross, the most humiliating and excruciating death one could only imagine, he took the sins of the world upon his own shoulders so that the stains that we create are finally removed once and for all.

Just like my son who chose to hide his spots, the mess would continue to linger and eventually leave a permanent stain unless he asked for my help to clean it up. God asks us to do the same. Instead of hiding the mess we have made, he wants us to seek Him for help and to accept what He has to offer. If we do not accept God’s help then the stain will remain leaving us impure before Him. If you have hidden your spots or stains in your own life, ask God to clean them and make you whole again.

is an author and editor for The Bottom Line Ministries as well as a member of Faith Writers. Currently she teaches high school language arts. She is a mom to four amazing blessings and enjoys every moment life has to offer. Renee has a fervor and drive to learn, she loves to read and spend time with her family, and is involved with her local church ministries. Humbled by God’s gift of words, she has a passion to write what the Holy Spirit has placed in her heart. She hopes to publish her in-progress book someday, but in the meantime, is honored to be placed as part of the TBL writing family and is holding on to the ride wherever God is leading. Renee and her family reside in their country home in Holland, Iowa.
Previous Superman
Next God, And the Rescue of Apollo 13