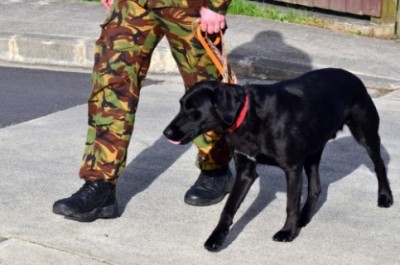 Former Marine corporal Deano Miller had been waiting four years to be reunited with the one friend who kept him going while serving in Afghanistan in 2010; his military yellow lab, Thor.

The reunion took place at the Seattle-Tacoma International Airport on Thursday May 22.   The two had worked together in Afghanistan in 2010 for seven months serving side by side. According to MailOnline.com, Thor was a constant encouragement to Miller; he “meant everything to him when they were serving together.” (Rush)

Miller had been trying to adopt the dog ever since he had completed his work in Afghanistan, and up until this Thursday, Thor had continued his military work with several other handlers while in combat. (Rush) Miller stated, “‘Thor was the only thing that kept me going every day.’” (Rush)

Mr. Miller is not the first officer to be reunited with his canine companion. At the beginning of May, U.S. Army Veteran Jason Bos had been “reunited with his long-lost ward dog, also with the help of the American Humane Association and Mission K9Rescue.” (Rush)

In this touching story, Miller mentions how much the dog meant to him because he was such an encouragement to keep going. He was a constant in Miller’s life that he could rely upon especially when times were tough.

That is how God is. A constant in our lives that walks beside us, leads us, and encourages us to continue even when the race is near the end. Like a continuous whisper he calls out to us in our times of need.

“These things I have spoken to you, so that in Me you may have peace. In the world you have tribulation, but take courage; I have overcome the world.” (John 16:33)

Thank you Thor for your service, and thank you Former Marine corporal Deano Miller for serving your country to protect our freedoms. May you be blessed.

VIDEO: Soldier, dog see each other for first time in nearly 4 years: Deano Miller, a former Marine, was reunited Thursday with his bomb detecting dog.

is an author and editor for The Bottom Line Ministries as well as a member of Faith Writers. Currently she teaches high school language arts. She is a mom to four amazing blessings and enjoys every moment life has to offer. Renee has a fervor and drive to learn, she loves to read and spend time with her family, and is involved with her local church ministries. Humbled by God’s gift of words, she has a passion to write what the Holy Spirit has placed in her heart. She hopes to publish her in-progress book someday, but in the meantime, is honored to be placed as part of the TBL writing family and is holding on to the ride wherever God is leading. Renee and her family reside in their country home in Holland, Iowa.
Previous “Lukewarm” Movie Review
Next Oceans of Grace