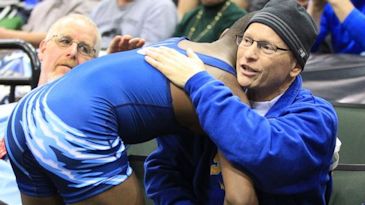 Moved Beyond the Match

Moved Beyond the Match

Malik Stewart, a high school wrestler from Blaine High School in North Dakota chose to humble himself after being defeated by his opponent, Mitchell McKee.  McKee received an unexpected gesture from his opponent when Stewart gave not only McKee a hug, but his father as well.  McKee’s father is currently going through his own match with cancer and Stewart was able to recognize the real issue at hand that goes beyond a wrestling mat.

“I got a little teary because I lost the match, and I knew the hard times he was going through,” Stewart added. “The crowd went wild and I heard a couple people say after I did it – that was pretty classy – but I just did it straight from the heart.” (AP)

This unselfish gesture is what God desires of us.  He wishes for us to humble ourselves before others “for God is opposed to the proud, but gives grace to the humble. (1Peter 5:5) and “above all else, guard your heart, for everything you do flows from it. (Proverbs 4:23).

is an author and editor for The Bottom Line Ministries as well as a member of Faith Writers. Currently she teaches high school language arts. She is a mom to four amazing blessings and enjoys every moment life has to offer. Renee has a fervor and drive to learn, she loves to read and spend time with her family, and is involved with her local church ministries. Humbled by God’s gift of words, she has a passion to write what the Holy Spirit has placed in her heart. She hopes to publish her in-progress book someday, but in the meantime, is honored to be placed as part of the TBL writing family and is holding on to the ride wherever God is leading. Renee and her family reside in their country home in Holland, Iowa.
Previous Repairer
Next Self-Evident Truth