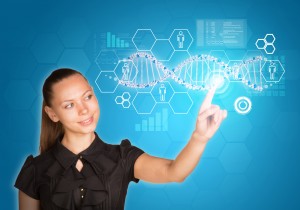 Telomeres and the Aging Process – Part I

Most of us have heard of DNA and chromosomes. But have you heard of telomeres? Here’s a quick biology review:

(1) Each cell in our body contains a nucleus. Within that nucleus are chromosomes.

(2) Chromosomes contain DNA. Telomeres are lengths of DNA on the ends of chromosomes.

(3) The DNA contains our genes.

Telomeres protect our genetic information and make it possible for the cells to divide. These “endcaps” have been compared to the plastic ends on shoelaces. In a similar manner, as those plastic tips protect the shoelace from fraying, telomeres keep the chromosome ends from fraying or sticking to each other, which could misconstrue or even destroy the genetic data.

Each time a cell divides and genes duplicate, the telomeres shorten. Once they have shortened to a critical length, the cell cannot divide. At this point, the cell becomes inactive or dies. Cancer, the aging process, and a higher risk of death have been associated with the shortening of telomeres. In young cells, an enzyme called telomerase adds bases to the ends of telomeres and reduces wear. But with repeated cell division, the cells will age because there is not enough telomerase.

Two major causes of aging are oxidative stress and glycation. With oxidative stress, highly reactive substances which contain oxygen cause damage to the DNA. This occurs when we breathe. It also occurs as a result of infection, inflammation, and the use of cigarettes and alcohol. Glycation occurs when glucose binds with DNA and leaves it unable to function properly. The combination of telomere shortening, oxidative stress, glycation, and chronological age are thought to cause aging. There is also evidence linking shortened telomeres to hypertension, arteriosclerosis (hardening of the arteries), diabetes and Alzheimer’s Disease.

Geneticist Richard M. Cawthon, M.D., Ph.D., Department of Human Genetics, University of Utah, found that shorter telomeres are associated with shorter lives. In one of his studies, he found that people with longer telomeres live an average of five years longer that those with shorter telomeres. Cawthon noted that one estimate indicated people could live as much as 1000 years if all processes of aging could be eliminated and oxidative stress damage could be repaired.

“Never again will there be in it an infant who lives but a few days, or an old man who does not live out his years; the one who dies at a hundred will be thought a mere child; the one who fails to reach a hundred will be considered accursed.” (Isaiah 65:20,KJV) Many theologians who have extensively studied prophecy have estimated the lifespan for some people living during the Millennial Reign of Christ may be as much as 900 to 1000 years.

Have you been blessed with “good genes?” If not, what health problems have you experienced that may be attributed to genetics?

Is there anything we can do to help our telomeres? Join us next week for Part II!

Denise is a Registered Nurse, married, and has lived in Alabama all of her life. She has been a Christian for more than 40 years and has studied Prophecy for over 25 years. She writes devotionals for Faithwriters (www.faithwriters.com). She also writes for TGGmag ('Tween Girls and God online magazine for girls age 9-12). She desires to share Christ with others through her writing and is looking forward to the soon return of our Lord Jesus Christ.
Previous Our Hope: Jesus Loves The Little Children
Next Is Anger Sinful